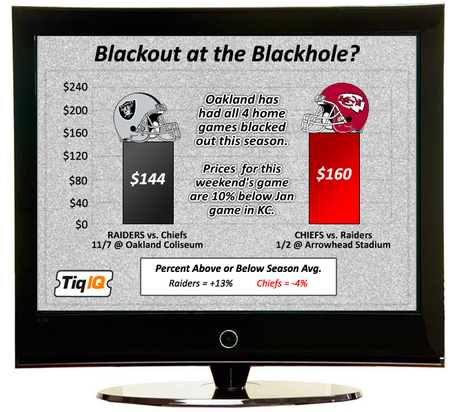 The Oakland Raiders have been known for some pretty terrible football over the last few years. In fact, next Sunday's game against the first place Kansas City Chiefs would likely qualify as the biggest game of the last eight years for Oakland. Yeah, it's Week 9.

As you can see in the image above (courtesy of TiqIQ), the Raiders have had all of their home games this year blacked out with the attendance has been floating around 40,000 at times this season. I passed this along yesterday but it's a quote from Raiders head coach Tom Cable that's worth repeating:

"It's already been hit with me today," Cable told reporters on Monday. "Do you think the Coliseum can be as big of an advantage as playing in Kansas City? I think it can be. I fully expect the crowd to be there and going nuts because this will be a fun time."

The numbers aren't quite in Cable's favor, yet. Though we expect the prices to rise as the week goes on, the average ticket price, per TiqIQ, has risen 13 percent for this game in Oakland. That would show some elevated interest in the game. Enough to avoid a blackout? We'll find out later in the week.

If you're an Oakland fan, this should be one of the biggest home crowds this season. The Raiders can gain a game on the Chiefs in the AFC West standings and break that awful blackout streak that dates back to 2009.

As always you can check out ticket prices to all the games at our Tickets bar at the top of the site. Here's a direct link to a variety of prices for the game in Oakland and then the season finale in Kansas City.