Share All sharing options for: Cardinals Not Exactly Driving Up Chiefs Ticket Prices 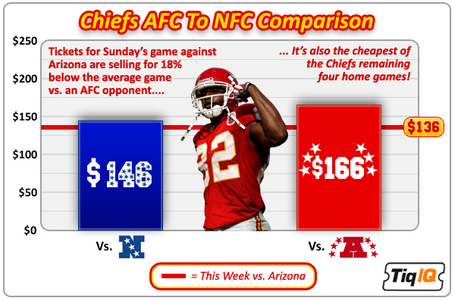 The Arizona Cardinals are hardly a national name so we won't be seeing a whole lot of national coverage of Sunday's game against the Kansas City Chiefs and judging by the cost of ticket prices with our partner, TiqIQ, there isn't a big demand for the NFC as there is the AFC.

According to TiqIQ, tickets for the Cardinals game are going for 18 percent cheaper than the average AFC opponent. That's not much of a surprise because the Chiefs have the NFC West this year. 49ers? Cardinals? Not exactly the same draw as the Dallas Cowboys, last year's NFC opponent.

That means this game is a pretty good deal (read: cheap). I'll be there so if anyone wants to buy tickets through us then you'll win some sort of prize from me at the game (note: this is not true). There will also be a few ticket deals each week sent out on our tickets Facebook page.

We've also got a graphic after the jump of ticket prices by section. 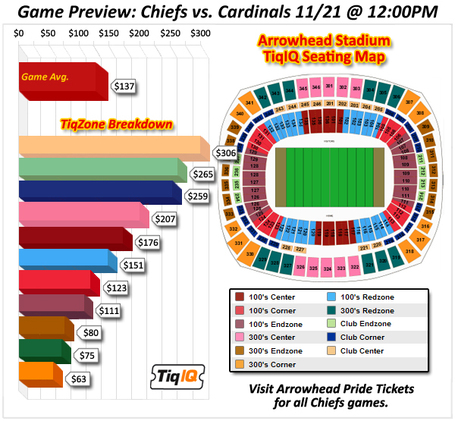