Chiefs vs. Broncos: Greetings From Invesco Field In Denver

Share All sharing options for: Chiefs vs. Broncos: Greetings From Invesco Field In Denver 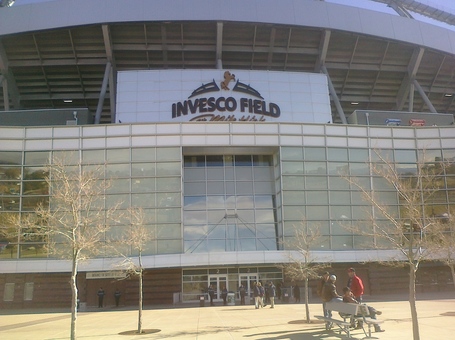 Good morning everyone on Mountain Time and good afternoon to everyone else. It's the Kansas City Chiefs and Denver Broncos today and I'm just settling into my seat in the press box here in Invesco Field.

It's slightly chilly with little wind so it appears we're on track for great football weather.

I've already got my Zubaz sighting for the day as a Chiefs fan I saw on the way in was reppin' the pants. I've seen a few Chiefs fans here, although it's still early.

The stadium itself looks pretty cool. It's different from Arrowhead in that there's actually civilization surrounding the stadium. Parking from folks across the street from the stadium was running about $45 but you're still pretty close. Yeah, it's the Broncos but the stadium isn't bad.

I've made it alive into enemy territory....