Since we're at the midway point of the Kansas City Chiefs season, I figured it'd be a good time to take a look at how far Todd Haley and the Chiefs had come.

Last year at this point, Todd Haley had coached the Chiefs to a whopping one win in eight tries. Yep, 1-7 at this point last year. I think losing is still fresh enough in most Chiefs fans mind that we remember what that felt like.

This year the Chiefs stand at 5-3, a full four games better than they were at this point last year and Chiefs fans are showing their approval.

The graph below is Todd Haley's month-by-month rating in our monthly approval polls for all of 2009 and 2010. 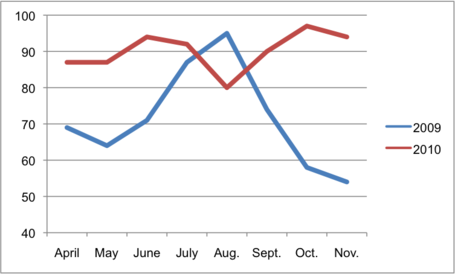 Note the change in September and October when the games actually start. Last year's 1-7 start clearly didn't sit well with Chiefs fans but I'm guessing Haley will be maintaining his 90-plus rating into January this time around.

Last November, Haley was entering his second lowest rating ever at 54 percent and this November, he's at 94 percent.