ESPN, Fox Sports, NFL Network Cost The Most To Get On TV

Share All sharing options for: ESPN, Fox Sports, NFL Network Cost The Most To Get On TV 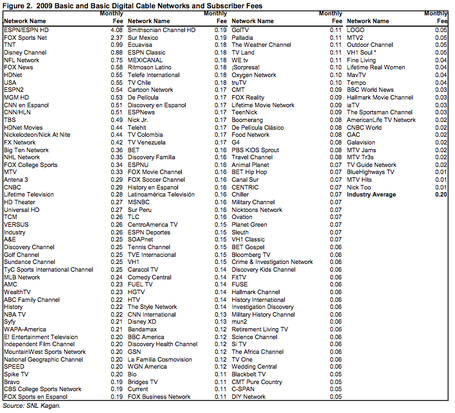 Earlier today, I came across this interesting table detailing the cost of individual TV channels. Basically, the networks on in the table above charge cable companies that much per subscriber to show those channels.

Here's how the top five of the full list (not just sports) breaks down in terms of monthly fees per subscriber:

If you're wondering why ESPN is so expensive, here's why: Most networks make their own shows or syndicate content. It's pretty cheap. But ESPN has to pay licensing fees for the NFL, MLB, NASCAR, NHL, NBA, etc. It's a lot more expensive just to have the ability to even broadcast the content. On top of those fees, ESPN and other networks are often bidding against each other for Bowl games, Monday Night Football and NASCAR races for example.

Monday Night Football is a great example of why ESPN costs so much. In 2005, ESPN outbid other networks for the rights to the Monday night game. Its cost was reportedly $1.1 billion per year, for eight years.

The industry average by the way is $.20 per channel. I think this is a pretty interesting role that sports plays in television programming.