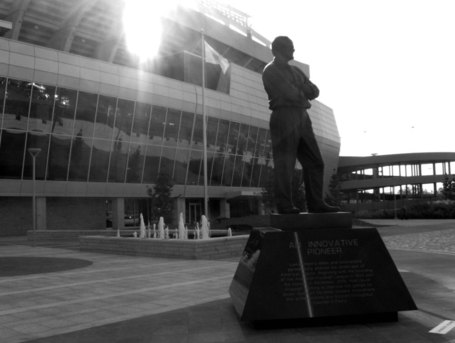 Yes, this is a story about private parts and the fine art of dirty play. Some say it happens in each game. Others say that, if Smith really broke the rules, he’s in the minority.

But from the beginning, some coaches teach young football players that anything goes — as long as you aren’t caught. Block for or tackle the ball carrier, for goodness’ sake, and do it however it needs to be done. By the time those players reach college or the NFL, each play is an act of desperation and primal instinct; one mistake could cost a player his job — especially one such as Smith, who’s been with eight NFL teams since 2003.

The 3-0 Chiefs are the league’s only remaining undefeated team. Still, they are heavy underdogs going into their matchup at Indianapolis. Even if they win, the idea of Kansas City going undefeated is almost as absurd as Stephen Colbert taking over the CBS Evening News – even if that’s a great idea.

Perfection already a remote possibility this year from Yahoo! Sports

The Colts' defense is battered and reeling. The offense has been one-dimensional. The so-so start has the fan base nervous, and with good reason. What was thought to be a walkover game when the schedule came out in the offseason now has the Chiefs on a roll and the Colts on their heels. A bit of normalcy should return, though. The Colts are a different team at home. The defense plays faster, which sets the tone. The Chiefs are the NFL's early-season "feel good" story, but the Colts are the better team. Colts 30, Chiefs 17.

The landscape of South Texas Amateur Football will be extremely different next season.

With the future of the Victoria Red Rage uncertain, a new franchise co-owned by former NFL rushing champion Priest Holmes will join the league and the defending champion Cuero franchise will have a new name and a new owner in 2011.

Raiders seek help from Priest from The Victoria Advocate

Tony Moeaki is another member of the LDS Church who has made significant contributions to the 3-0 Kansas City Chiefs in September.

The rookie tight end has caught 12 passes for 123 yards and two touchdowns. Not bad for a guy who hardly played in the pre-season.

Moeaki, from Wheaton, Ill., played at Iowa before he was taken in the third round of this year's draft.

Mormons in the NFL: Week 4 from Mormon Times

The division-leading Chiefs (3-0) are coming off their bye week, so now they get down to the business of showing if they're really ready to contend.

In the 32-team NFL, the Chiefs are tied for second in fewest points allowed per game (12.7) and rank fifth in run defense (75.0 yards allowed per game). But they play the Indianapolis Colts, Houston Texans and Jacksonville Jaguars in their next three games. After those games, the Chiefs should have a better idea of where they are in Year 2 of their reconstruction.

Analysis: Chargers only 2-2 despite ranking No. 1 in offense, defense from The Denver Post

However, the biggest surprises have come in the standings. I'm no expert on the Chinese calendar, but this must be the year of the Chief because the boys in Kansas City have jumped to a 3-0 start and are the lone undefeated team still standing.

Rarely do you see such a turnaround after one season. I know it's early, but head coach Todd Haley looks to have revamped the Chiefs, and Arrowhead Stadium is again one of the most electric stadiums in all of sports-all in just his second year of calling the shots.

Students, parents and teachers will form a walking school bus with community leaders and special guests such as former Chiefs running back Kimble Anders, Chiefs mascot KC Wolf and Royals mascot Sluggerrr. There will also be a news conference at 8:30 a.m. outside the school to outline a new program called Active Living KC.

When NFL first-rounder Eric Berry signed his $60 million contract with the Kansas City Chiefs, he asked his twin brothers what they wanted. Evan and Elliott Berry are freshmen football players at Fairburn's Creekside High.

So what did the twins ask for? Maybe matching Mercedes convertibles, a small country, or limo service to-and-from school each day?

Their body of work isn't super-impressive with wins over the Browns, 49ers and Chargers (who always seem to struggle early into seasons), but they are winning with strong defense, steady defense and well-timed big plays. Will they keep it up? Probably not. By Week 8 I might be able to chalk them down as the "2nd Quarter Disappointment" but for now they are the surprise of the league. Let's just see if they can keep it going for the rest of the season.

NFL hangover: Week 4 from The Stylus

Yeah, I know, we're only four weeks into the season. Nevertheless, I still want to know which is more important for the long haul -- talent or chemistry? And I'll tell you why: The Kansas City Chiefs aren't on this year's Who's Who in the NFL, but they happen to be its only unbeaten team.

OK, so that can happen after four weeks. But what about the New England Patriots? Every year they're among the league's best and brightest, yet tell me how many future Hall of Famers you count on their roster. Let's see, there's Tom Brady, Randy Moss and ... and ... and ...

While the Chiefs' strengths are perfectly suited to give the Colts yet another loss - wear the defense down by running the football and get in Manning's face with pressure - it's just too early to write off the Colts. They bounced back from a season-opening loss at Houston with a convincing 38-14 prime-time home victory over the New York Giants. That beleaguered Colts' defense typically plays faster at home, if taking into account last season as well as the Giants' game.

The chances of the Kansas City Chiefs being the only unbeaten team after 4 weeks was 82 in 10,000 according to AccuScore simulations. They may be undefeated but they actually dropped -5.9 percentage points because the Chargers and Broncos both won. San Diego's two losses came from self-inflicted wounds and if they stay focused, reduce costly fumbles and improve their special teams return coverage they should take the AFC West (68 percent).

Percentages for Your Team Making NFL Playoffs  from Opposing Views