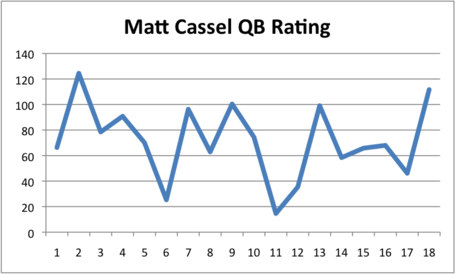 Love him or hate him, Kansas City Chiefs quarterback Matt Cassel has led KC to three straight wins to open up the 2010 Chiefs schedule.

Love him or hate him, Matt Cassel is the quarterback for the foreseeable future in Kansas City.

Love him or hate him, Matt Cassel is a very inconsistent quarterback.

I like Cassel's perceived leadership skills. I like his mechanics, scrambling ability, arm strength, etc. But I can't get over just how inconsistent he's been as the Kansas City Chiefs quarterback. It frustrates me. I tell myself that good quarterbacks do have bad days but their average level of play should be pretty good.

I'm not writing this to knock Cassel or start up a full fledge "Cassel sucks/No he doesn't" debate. I simply want to point out the major reason I am not yet a Cassel Believer, if you will. He's inconsistent. Too inconsistent.

Where's the rock that the Chiefs can rally around? Where's a 3-4 game stretch of solid quarterback play? Matt Cassel hasn't been able to provide either one of those things. And the stats show it.

Again, I'm not knocking Matt Cassel or making excuses. At some point, Matt Cassel will have to become a consistently good quarterback. It's his offense. He has a dedicated offensive coordinator this season. And the Chiefs running game is killer. The inconsistency has to stop at some point. If it doesn't, then the problem is pretty clearly....Matt Cassel.

Check out the chart above. That's Cassel's QB rating in the 18 games he's played as the Chiefs' quarterback. After the jump, I've got two more charts detailing the inconsistency of Matt Cassel.

To get some conversation started, let us know if Cassel's inconsistent play is getting to anybody else. It's really starting to bother me the more I analyze it.

Note: Stats are over Cassel's 18 games as the Chiefs quarterback. He missed Week 1 against Baltimore last season. 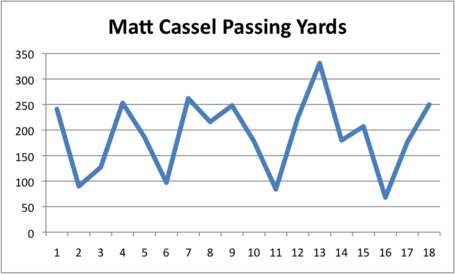 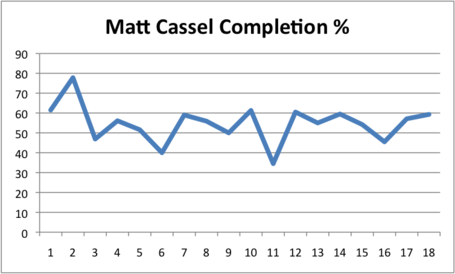