Dexter McCluster Hears About The Chiefs At Ole Miss

Share All sharing options for: Dexter McCluster Hears About The Chiefs At Ole Miss 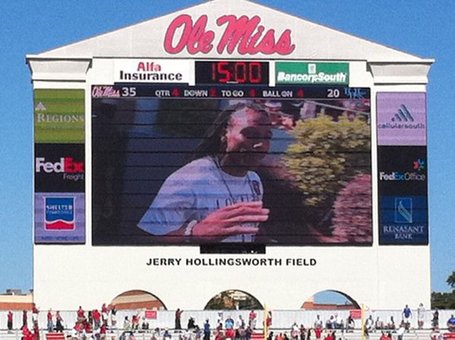 Generally during bye weeks the younger players will go back to their colleges to catch a game. And when you're a big NFL star, you get put up on the jumbo tron, like Kansas City Chiefs WR Dexter McCluster did in the Ole Miss game on Saturday.

Via Josh Looney of KCChiefs.com, here's what McCluster said about the 3-0 start and the reaction in Mississippi:

"Lots of people were congratulatory about the 3-0 start," McCluster said. "They told us that they are Chiefs fans down there now, and we’re all welcome down there anytime."

From what I've gathered via Twitter, Glenn Dorsey caught the LSU game and Pierre Walters checked out the Eastern Illinois game. I'm sure about half the team went to a college game during the bye week.