Share All sharing options for: Chiefs-Broncos Still A Hot Ticket In Kansas City 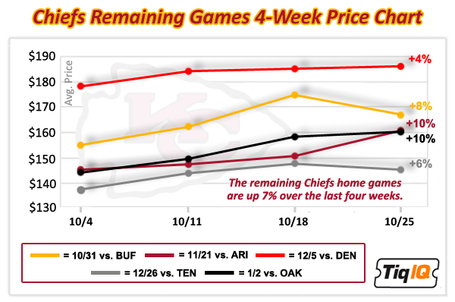 TiqIQ is a partner of Arrowhead Pride. To buy Kansas City Chiefs tickets through us, check out the Tickets tab at the top right of the site.

The Kansas City Chiefs are 4-2 and in first place of the AFC West. Their division counterpart Denver Broncos are 2-5 and entering into a tailspin.

Yet Broncos tickets are still the best in town.

I imagine the average price of each of those games will rise as each game gets closer, particularly if the Chiefs keep winning. It's going to be interesting to see the Titans and Raiders game late in the season because it's possible the Chiefs wrap up the AFC West early (I know, I know I jinxed it).

Also according to TiqIQ's numbers, now is the best time to buy Bills tickets. They've dropped since last week so if you're looking to make it to a game this season Buffalo may be a good (read: cheap) choice.

Check out the tickets tab at the top of the site to see the going rate on the secondary market.