ESPN.com runs a weekly approval poll on NFL head coaches and currently sitting at the top is none other than Kansas City Chiefs head coach Todd Haley. This isn't a coach of the year ballot or anything like that. It's simply: Do you approve of the head coach?

What's interesting about the ESPN.com data is that it includes all NFL head coaches. So, according to ESPN.com, there isn't a fan base in the league that has a higher percentage of believers than the Chiefs.

As you know, we run monthly approval polls for Todd Haley, GM Scott Pioli and owner Clark Hunt. Those three have ranked very, very well with the Chiefs early start to the season. In our data (which has more voters than ESPN.com by the way), Haley hit his low point last December sitting at 48%. Nine months later in September and Haley was at an all-time high 97%.

Here's how he's done since the beginning of the year in our approval ratings: 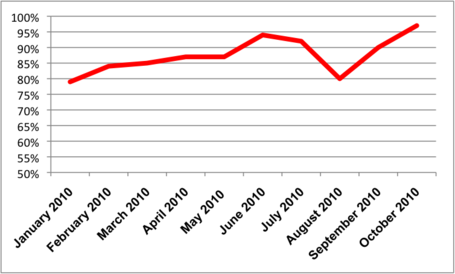