The NFL this week distributed a video to players and coaches this week on what kind of hits to avoid and what kind of hits are acceptable. Legal vs. illegal hits has been a big topic of conversation around the league this week and Todd Haley said this week that he has addressed it with this team and it is a priority for them.

The video distributed by the league includes a couple of Chiefs plays as examples of hits to avoid and clean plays.

Chiefs safety Kendrick Lewis made a cameo in the "hits to avoid" section. In Week 2 against Cleveland, Lewis hit Browns TE Evan Moore with what the league called "helmet to helmet contact with a defenseless receiver."

Moore was defenseless because he was going up for the catch as Lewis came in. The result.... 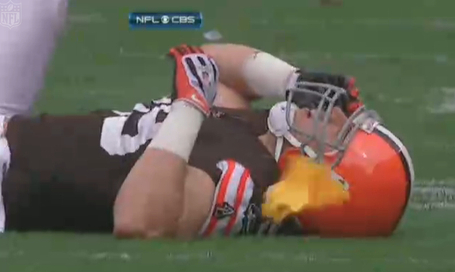 ...a concussion for Moore.

"Players must play under control," Ray Anderson, NFL VP of football operations said in the video. "If a player launching into an opponent misses his aiming point he will nevertheless be held responsible for what he hits. Initial contact in the neck or head area with a forearm, shoulder or helmet is prohibited. Hits to the head or neck area of a defenseless player must stop. Not just the helmet contact but shoulder or forearm contact as well."

That's what the league felt Lewis did on the hit to Moore. It wasn't a blatant violation but replays do show he makes contact with Moore's helmet.

The next Chiefs appearance comes under the section with hits that are OK. It's New York Giants WR Ramses Barden Steve Smith running across the middle of the field and former Chiefs safety Jarrad Page lowering his shoulder and driving into his chest. (Ironically, Page was flagged on the play.)

"Lowers his target," Anderson says describing the play. "Shoulder to the chest, ball separated. Again, an effective result accomplished within the rules."

The rules aren't changing -- just the discipline for violating them is -- so the Chiefs theoretically don't change the way they coach or play.

If you were like me (and probably some players) and were confused on what is legal and illegal, then definitely check out the video.