Share All sharing options for: Former Chiefs Coach Herm Edwards Being Linked to the USC Job 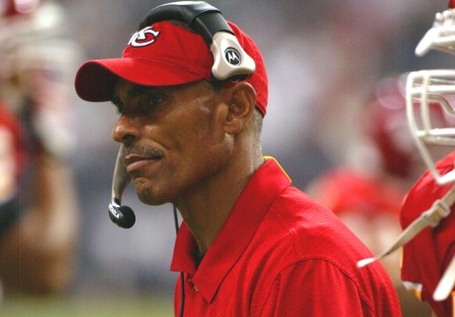 We've said before that former Kansas City Chiefs head coach Herm Edwards has the necessary qualities to be a helluva recruiter as a college football head coach.

Well, one college job has unofficially opened and Herm's being linked.

It's been reported by just about every major sports media outlet that Pete Carroll will be making his way to the Seattle Seahawks as their head coach. And with the opening that will create at Southern Cal, Herm Edwards could be a candidate for the position.

I just caught Shelley Smith link Herm's name to the SC job (assuming it becomes available) as a candidate. Chris Mortensen also said on ESPN Radio today that a source tells him USC will take a look at Herm.

You could make a decent argument that the USC job is better than a handful of NFL jobs (including, at the present, the Chiefs job).

It's the unofficial (non-)professional franchise in the country's second biggest media market so the exposure is there. Heck, Carroll is reportedly signing a $35 million contract with the Seahawks because of his work at USC.

The beach is close. California is one of the top three recruiting states for college football. The money is good (Carroll was reportedly getting $4.5 million per year, which is is more than Herm was getting in Kansas City).

As of now, it's just speculation and conjecture on the part of the media folks but he does make sense as a college head coach.