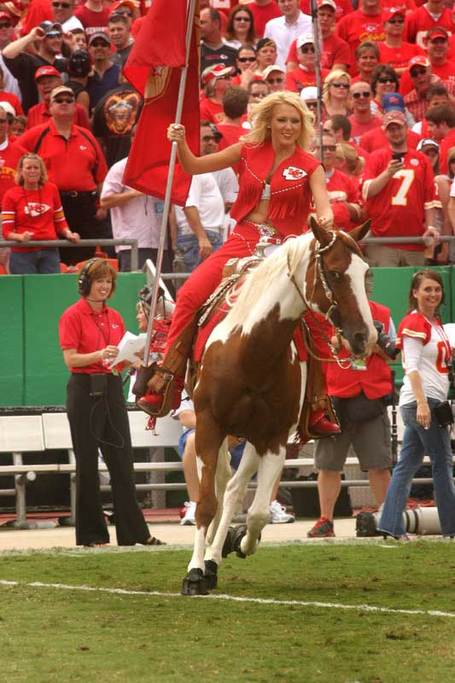 Your Kansas City Chiefs news from across the internet. Happy playoffs. 2 today, 2 tomorrow. Who ya got?

There are some things you should know about the newest immigrant from the east to arrive at Foxboro West.

If Charlie Weis is one thing it is this: he’s a Jersey Guy. He was born there, bred there, got his first coaching jobs in the Garden State, won his first Super Bowl ring working out of Giants Stadium. He knows Springsteen and Bon Jovi. He knows what it is to "go down the shore." He has said "How Ya Doin’ " about a million times in his life.

Beyond the Jersey roots, here’s what else you should know about the Chiefs offensive coordinator.

"This is a really important hire for Todd," said former Chiefs quarterback Rich Gannon, who called several of their games this season for CBS. "There is a lot of carry-over between their systems and their philosophies. I don’t think it will be a hard thing to mesh.

"Having Charlie will give him someone who can spend a lot of (high-)quality time with the quarterback and help develop that position. That’s what Matt Cassel needs. Nothing against Joel Collier, but he came out of the front office. He wasn’t even meant to coach.

It’s a happy reunion for Haley, Weis from KC Star

The Pro Football Hall of Fame announced the 15 finalists that will be considered for induction into the Hall with the Class of 2010.

The 15 players and coach are:

Before this season began the Kansas City chiefs hired Scott Pioli, New England’s former vice president of player personnel, to serve as their General Manager. It was pretty well known that the Chiefs NEEDED someone like Pioli to make personnel decisions to get the team back on the right track, which he has seemingly started to do by bringing in players and coaches from the Patriots team that he so successfully built in the early 2000’s to transform the Chiefs in to the Patriots Redux. He started with Matt Cassel, and has slowly added bits and pieces to start to build the team he wants, and one he knows can win.

Fortunately for scouts, each college season provides the perfect scenario to judge a player's cool when the pressure is on with bowl games—and last night's game showcased a couple of players the Kansas City Chiefs should pay close attention to come April.

Althaus will be signing his two new books, "For Chiefs Fans Only" and "For Tiger Fans Only." The books will be available at Tim’s that evening.

Many of the individuals who are featured in the two books will be on hand for the event, including former major league pitcher and Cy Young Award winner and Kansas City Chiefs fan Rick Sutcliffe.

There is also the possibility that some former Kansas City Chiefs might be on hand, including members of the Chiefs Ambassadors Club. The weather and scheduling will play key roles in their availability.

Book signing scheduled for Wednesday from The Examiner

Something spectacular could happen today. The NFL playoffs begin. Every few years, a playoff game rises to the level of a classic - to be remembered for decades.

Most lists go to 10. Mine goes one higher. Here are my 11 most memorable playoff games from the past 40 years, Super Bowls excluded. That's a separate discussion.

1971: Miami 27, Kansas City 24 (2 OT). Christmas Day, and an aging champion of Super Bowl Past, the Chiefs, clashes with Super Bowl Future, the Dolphins, in Kansas City. Ed Podolak of the Chiefs accounts for two touchdowns and 350 all-purpose yards. But the game is decided by kickers. Hall of Famer Jan Stenerud misses his chance. Garo Yepremian, a diminutive Cypriot tie-maker, does not.

The NFL's non-playoff teams are still busy. Kansas City's Todd Haley, left, is going to bring in ex-Notre Dame coach Charlie Weis to run the Chiefs offense. They have something in common: Neither played college or pro football. Weis might last longer than Chan Gailey, who didn't get to the opener with Haley in 2009. Click on the photo to see what other teams are up to.

What's up with the NFL's lousy teams? from The Orange County Register

To determine the 15 teams with the most Swagger, Old Spice worked with the NFL to obtain and analyze statistics from the past 3.5 years (2006 through week 9 of the 2009 season), looking at key factors that embody the definition of Swagger. The teams that topped the list scored high marks in a variety of categories:

-- Red Zone Performance: Scoring and Tackling when it counts requires Swagger on both sides of the ball -- Taking Your Swagger on the Road: Winning a game while tens of thousands cheer against you requires massive amounts of Swagger -- Fourth Down Conversions: It's fourth down. You have to have Swagger to go for it ... and make it -- Gentleman's Game: It takes a different level of Swagger to play the game by the rules and avoid penalties -- Merchandise Sales: When fans wear your team colors like a uniform, you definitely have Swagger... ...13. Kansas City Chiefs Old Spice Reveals Which NFL Teams Have the Most Swagger from The Biloxi-Gulfport Sun Herald

This year the Chiefs were fighting history. Specifically, the history of one Clancy Pendergast, who obviously is not known for fielding good defenses. In 2009, Todd Haley needed a defensive coordinator who could get the most out of a pack of marginally talented defenders. He picked the wrong coach.

As has been pointed out previously, the same players Pendergast coached last year in Arizona allowed almost a touchdown less per game this year. The Cardinals had 13 more sacks and eight more interceptions in 2009 compared to last season. Not surprisingly, the Cardinals lost just one game when scoring at least 20 points this season. A year ago they lost on four such occasions.

The Cardinals made the playoffs this season because Ken Whisenhunt had the foresight to fire Pendergast after last year’s Super Bowl.

The Chiefs had no chance this season to field a good defense. That will be factored into our grades.

MrKolbySmith Fried shrimp, cheese grits, baked potato. Good to be back in the South

JWilliams48 enjoying my offseason so far..having a ball wit the bros

JWilliams48 gotta question twitter>>??? For all those who seen the Denver vs Chiefs game...was the P I by Champ Bailey in the 4th..let me know

almighty31 waitin to get on the plane to the A

BobGlauber RT @Ian_OConnor It would be pretty cool if Mark Sanchez said he didnt think Pete Carroll was ready to make the jump back to the NFL. #jets