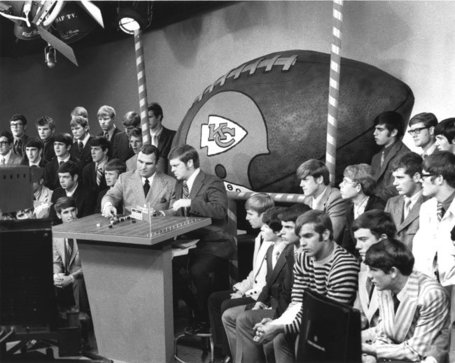 Your Kansas City Chiefs news from across the internet. Slim pickings today. No idea what the photo is from, but it's pretty awesome.

One question about this football marriage between the Chiefs and Charlie Weis:

Is he bringing Tom Brady with him?

While no official declaration has been made by the organization, it seems fait accompli that Weis will become the team’s offensive coordinator. Football coaches are the ultimate example of not counting chickens before they hatch. There’s always a second or third thought, another bigger or better offer comes in or the family decides they don’t want to move to a new home. There’s always a chance this thing blows up.

Thursday came and went with no word from Arrowhead Stadium on Charlie Weis, whose official hiring as Chiefs offensive coordinator could come any day.

Weis was fired as Notre Dame head coach on Nov. 30, and his long association with coach Todd Haley and general manager Scott Pioli made him an obvious candidate to join the Chiefs.

There may not be a better fit as Haley’s next offensive coordinator than Weis, and Haley said Wednesday he had spoken with Weis about the opening.

No word from Chiefs on Weis’ official hiring from KC Star

"I know they’ve talked," Crennel’s agent Joe Linta said per the Newark Star-Ledger. "And I’m sure they weren’t just calling him to say hi."

But how serious were the talks? Not very so far.

"Let’s put it this way: Romeo and the Giants are only Facebook friends right now," Linta said.

Terrance Copper, a former standout at Washington High School, finished up his first season with the Kansas City Chiefs in a nice way.

He had two catches for 57 yards, including a career-long 50-yard reception on Kansas City’s first offensive possession, in a 44-24 win over the Denver Broncos in the season finale. Copper also had two special teams tackles.

Copper wraps up season in style from Washington Daily News

The Giants are also not the only team pursuing Crennel.

"We’ve had a few calls from teams," Linta said in an e-mail. "But nothing concrete as yet."

One of those teams is the Kansas City Chiefs, who would like to speak to him next week about their defensive coordinator job, according to reports.

Crennel was a Giants assistant coach from 1981-92 and he served on the same staff as Coughlin, who was the Giants’ receivers coach from 1988-90. He was also Bill Belichick’s defensive coordinator in New England from 2001-04 - - a four-season span that included three Super Bowl championships.

The Bengals don't expect another such sleepwalk on Saturday. In their locker room Sunday, a sense of embarrassment pervaded, even though the players were saying all the right things about there being no loss of confidence.

They feel they owe the Jets one. Ndukwe even referred to it when asked if his older brother Ike, an offensive lineman for the Kansas City Chiefs, would be coming to the game.