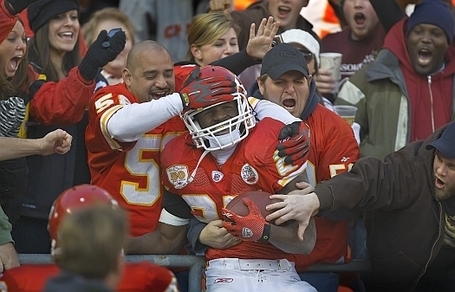 Your Kansas City Chiefs news from across the internet. Today is about awards, contract, and coaches. Read on AP faithful...

About 10 weeks ago, it would have been laughable to predict Jamaal Charles would finish the 2009 season as the Chiefs MVP.

But that was before Charles took over as the focal point of the Chiefs offense. Everybody was a twitter about Larry Johnson and he had been sent packing in what the club hoped would be addition by subtraction. It turned out that’s exactly what the move was for the Chiefs offense as Charles got his shot.

The second-year back from the University of Texas went on to have one of the best second-half offensive performances in the league, ran his way into the Chiefs record book and earned the Derrick Thomas Award as the team’s MVP.

Forget, for a moment, about the Chiefs trying to field a competitive team in 2010. They’ve got plenty of work to do to field any kind of team.

Twenty-two of the 65 players who finished the season with the Chiefs or on the injured-reserve list are without a contract for 2010. Linebacker Mike Vrabel, wide receivers Chris Chambers and Bobby Wade and safety Mike Brown are among the potential free agents who may have played their last game for the Chiefs.

The situation is clouded by uncertainty over the fate of the collective bargaining agreement. If the players and owners can’t agree on terms of a new agreement by the beginning of the new league year on March 5, the NFL’s rules governing free agency will change.

NFL.com reported on Tuesday that Krumrie had been fired, quoting "league sources." D’Alessandris was seen being walked out of the club’s offices on Tuesday morning, carrying boxes and escorted by security personnel.

Now the true rebuilding begins.
First, Haley must get an offensive coordinator. It’s simply too big of a job for the head coach to do and the name getting thrown around is Charlie Weis, the OC of the Patriots in their glory days whose star burned out at Notre Dame.
There’s also talk of dumping defensive coordinator Clancy Pendergast and hiring another ex-Pat, Romeo Crennel, the former head coach of the Cleveland Browns.
After getting the coaching staff firmly in place, the Chiefs have to address many issues:

Good Vibes for KC Chiefs from the McPherson Sentinel

There’s every reason in the world to be down about the Kansas City Chiefs after the way Todd Haley’s first season unfolded.

Other than Sunday’s 44-24 win over Denver in the season finale, the 2009 campaign was a complete disaster.

The Chiefs finished 4-12, and by NFL standards, that’s a terrible season. Even the Raiders finished 5-11.

The win over Pittsburgh was nice, but the Chiefs were also outgained nearly 2:1 that day. The other two wins over Washington and Oakland can be attributed to playing awful teams with awful quarterbacks. And the Chiefs had to scratch and claw just to beat those teams.

Individually, the lone bright spot was the play of Jamaal Charles at the end of the year.

A lot of people think it’s going to take two or three years for the Chiefs to get back into playoff contention. That’s where I disagree.

This is where I see hope for the Chiefs.

The Charlie Weis carousel is spinning. Where will the former Notre Dame coach, who has said he will coach in the NFL next season, end up?

SI.com reported that Weis is a strong candidate to be the offensive coordinator in Kansas City. But could the Bears' dismissal of OC Ron Turner on Tuesday make Weis a candidate in Chicago?

ESPN reported that Weis finds the Bears opening intriguing and might be interested in it, as it is close to his family's home in South Bend, Ind. But whether the Bears and head coach Lovie Smith have mutual interest is unknown.

With Charlie Weis hunting for a job, are Chiefs or Bears a better fit? from USA Today

Former USC and current Kansas City Chiefs kicker Ryan Succop has been named the Mack Lee Hill Award winner as voted on by his teammates on Tuesday.

The award is presented annually to a Chiefs rookie or first-year player that best exemplifies the spirit of the late Mack Lee Hill, who passed away during his second season in Kansas City in 1965.

Succop was 25 of 29 (86 percent) in field goal attempts, which tied him for the best by a rookie (minimum of 20 attempts) since the AFL-NFL merger.

Todd Haley seemed to make enemies everywhere within the Kansas City Chiefs whenever he opened his fat yap. The rumor was he and Scott Pioli barely spoke to one another during the season. After trading for Matt Cassel and Mike Vrabel (and drafting Tyson Jackson with the #3 pick), the Chiefs managed to win only 4 games. Oh, and Haley is supposed to be an offensive expert. He even fired his offesnive coordinator during pre-season and took over the job himself. The 2009 Chiefs ranked 25th in the league, averaging 18 ppg.

Why more coaches are not getting fired from Stampede Blue

As a longtime attendee of games inside Arrowhead Stadium, I strutted into Invesco Field fully confident that the day would be like no other. After a 600-mile trip across the barren and cold states of Kansas and Colorado, I saw undoubtedly the best Chiefs game in recent memory. The Chiefs won their first game ever at Invesco Field, and Todd Haley finally found an exclamation point.

I woke up and completed my usual pre-game ritual before heading to the stadium, slipping on my lucky Derrick Thomas jersey and donning my lucky Chiefs’ winter cap I bought during the 2003 winning streak. It was an odd feeling riding into downtown Denver and actually becoming a minority at a football game, but in some games at Arrowhead this year, I was almost a minority among opposing fans.

Chiefs vs. Broncos – No Ordinary Day from WPI

Before the playoffs kick off this weekend, the NFL implemented a temporary rule change that will prevent an instant replay of what happened earlier this season in the New York Giants-Philadelphia Eagles game.

From now on, time remaining on the game clock will be reviewable but will be limited to situations in which time is deemed to have expired or not expired prior to, during or after the last play of the first or second half, or of an overtime half, according to a memo that NFL commissioner Roger Goodell sent to the 32 teams.

Impending free agent OLB Mike Vrabel, surprisingly, said Tuesday that he'd like to return to the Chiefs in 2010.
Vrabel finished his worst season in nine years with two sacks for the 4-12 team. "There’s a desire by both parties to
get something done," he said. "I’d love to come back here and be a part of getting this thing turned around."
From Rotoworld

"The Chiefs draft fourth or fifth this year? I’ll tell you, if Sam Bradford (the Sooners QB) is sitting there at number five, I’m gonna take that pick. I don’t feel very confident in Matt Cassel. I’m not thrilled with him. …Overall, I don’t see him as the log-time fix that the Chiefs need for the future."

almighty31 Y the feds snatchin my guys up at the airport. SMDH!!! They glad i wasn there. they aint even do nothin

kb_kcstar Here's a thought for all of you panicking about Chiefs retaining Pendercast: Perhaps he agreed to being stripped of DC title.

kb_kcstar Because if I'm Clancy, I'm agreeing to just about anything to avoid being fired two years in a row. That's not good for the ol' career.

FarragoJerid: Is glad the Chiefs ended on a high note...hope we can land Crennel and Weis! Already looking forward to the draft!