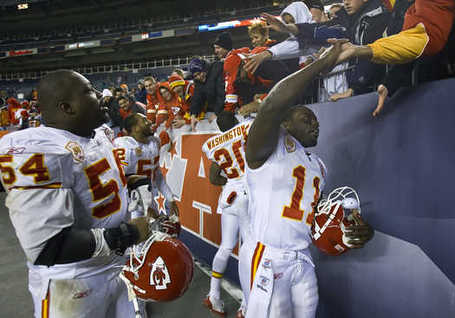 Your Kansas City Chiefs news from across the internet. A lot on Waters and DJ this morning. More repeats of the Charles praise. Three good players that had a rough season due to conflict with the coach. My observation? These players were largely shunned by Haley and had normal to great seasons. Bowe and Cassel were Haley's pet projects and gave the worst performaces of their careers. I do think Haley improved as the season went on. I hope he continues to grow and lead this team to glory, but looking at those five players makes me wonder about his judgement and ability to coach players.

Waters was dueling with one of the Chiefs defensive linemen in a drill when he twisted his left foot and ankle. He didn’t just sprain it; he really ripped it up. There were torn ligaments on the left side of his foot at his ankle. Waters had turned the ankle completely over, to the point where his ankle touched the ground on the twist.

Trainers walked Waters off the field that day. But he was back to practice within 24 hours. While some of his workload was scaled back, he didn’t miss a practice. Not in camp, or not during the season, even though at least twice he twisted the ankle again. Only when he pulled a hamstring late in the year did Waters not practice.

Even as he put the cap on the Chiefs 2009 season, the ankle and foot were still sore, still a bother.

After everything that happened with Waters before training camp even started, why did he practice every day? Why didn’t he take some time off and let it heal?

"Pride," Waters said. "I wanted to be out there. It was something I could deal with most of the time."

"They say stuff rolls downhill, and we’re at the bottom," Waters said Monday as the Chiefs, who finished their 4-12 season with a 44-24 win over the Broncos on Sunday in Denver, cleared out their lockers and scattered for winter. "We take that burden because we’re big boys.

Warning: The following article contains the name of a kicker that may be hazardous to your health.

With the NFL playoffs set to begin Saturday, we hate to bring up Lin Elliott’s name yet again. But in the name of science, it’s important.

Sure Elliott missed three field goals in that playoff game against the Colts in 1996, but there may be a good reason for it.

The goal posts likely looked narrower after each miss.

Research by Purdue University professor Jessica Witt found that a player’s perception of the goal posts changed after a missed field goal. The results of her study appeared in the publication Perception.

Additional Warning: Whitlock content ahead. After a few non-Whilockian posts lately, it seems he's gone back to the type of writing we all know and love.

In more than a decade of grading the Chiefs, this season was easily the most difficult of my career.

It’s hard to analyze the growth of your students when a class clown is constantly disrupting the classroom. Coach Todd Haley’s repeated outbursts and attention-seeking decisions wreaked havoc in my Football 101 class.

Because of Haley, this year’s grades will probably be controversial and stir up a great deal of disagreement among you, the parents of the Chiefs football players.

If Johnson had not tweeted himself out of town, would Haley have stuck with him? Or would he finally have given his little-used, little-known backup the ball?

Haley won't say. But the big win in Denver, made possible by the emergence of the soft-spoken running back with sprinter's speed, has sent the Chiefs into the offseason in an upbeat, positive mood not generally found on 4-12 teams.

Charles wound up with 1,120 yards, not bad for somebody who played roughly half a season. He has given Haley something to build around in the second season of a franchise overhaul. The team's euphoria over beating the Broncos must be tempered by the fact that it's won only six of its last 41 games.

• How about those Kansas City Chiefs? At least, I think that was our beloved team that put a 44-point hurting on the Donkeys up in Denver.

Where has that team been all season? We saw them once, in a home victory over Pittsburgh, but for the most part, Todd Haley’s squad has been AWOL all season.

I know everyone is all geeked up over the win in Sunday’s finale, but two things bother me.

Chiefs’ finale warms up cold fans from The Examiner

Comeback player of the week: Derrick Johnson. The linebacker helped the Chiefs sting the playoff-hopeful Broncos with two interceptions — returned for 45- and 60-yard touchdowns. For much of the season, Johnson and the Kansas City defense have been on the opposite side of big plays. Kansas City finished the season with the league's 30th-ranked defense, 31st against the run.

and from the same article...

Defensive player of the week: Bernard Pollard. The Texans safety had big-play impact in the victory that provided the franchise with its first-ever winning record. Pollard recovered a Fred Taylor fumble in the end zone for a touchdown in the second quarter, then snuffed out a fourth-quarter threat by intercepting a Tom Brady pass.