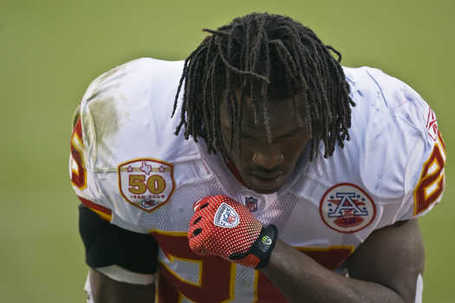 Well, it took 16 games but we may have found the Kansas City Chiefs offensive identity:

Surprisingly, it's Jason Whitlock of the Kansas City Star who is saying Charles has been so good for the Chiefs that he "just may have stopped me from whining about Scott Pioli and Todd Haley."

Whitlock writes that Charles has the right initials (J.C.) to inspire belief and work miracles. He went over Charles' second half production since being named the starter and called his 6.0 yards per carry a "Barry Sanderslike average" and didn't stop there - he called him as good as any back in the league.

More importantly, Whitlock writes, Charles may have given the Chiefs what they've been looking for all season - an identity.

"Charles is making me think differently about the Chiefs," Whitlock writes. "They have an offensive identity. They have a home-run hitter in the backfield, a guy who will make the opposition respect the play-action pass on first down."

Whitlock qualifies these statements by saying the Chiefs just need a legit No. 1 receiver, new center and competent tight end to be a NFL-caliber offense next season.

It took 16 weeks, but the Chiefs may have finally answered the biggest question this team had in training camp.