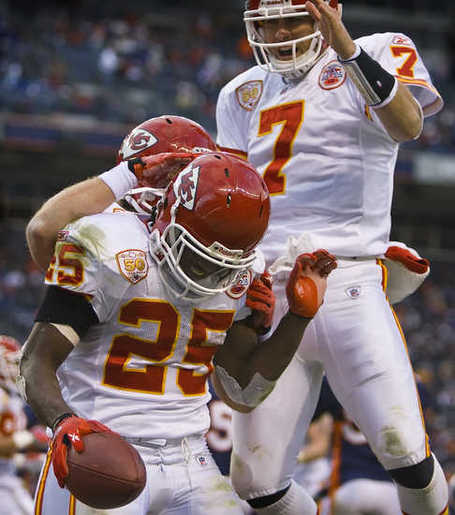 Your Kansas City Chiefs news from across the internet. This just in, Charles can run the rock. It was pretty evident during yesterday's game why it took so long for JC and DJ to see serious playing time this season (note sarcasm). Anyway, great win for the Chiefs. Now, your news.

Todd Haley laid out the goals for his football team last Monday. They were ambitious, far-reaching and maybe a bit wacky.

No. 1 was beating the Broncos and knocking them out of the playoffs.

No. 3 was holding the Broncos under 20 points.

And fourth was the Chiefs offense scoring more than 30 points.

Haley was three for four on his agenda, as the Chiefs beat the Broncos 44-14, knocking Denver from any shot at the AFC playoffs and doing it on the legs of Charles, who ran for 259 yards.

Chiefs Achieve Goals In Beating of Broncos from Bob Gretz

This season will, in time, be better off forgotten. Twelve losses aren’t the kind of thing a team wants to remember. There weren’t many hallmark moments in 2009, and the Chiefs can admit that now that it’s over.

"The important part of this year," Chiefs coach Todd Haley said, "was to get through it."

So many losses, ugly moments, questionable calls and odd moves. That’s what will probably define Kansas City’s third consecutive losing season. But at least Sunday offered a vacation. The Chiefs went on a four-month getaway before the offseason program begins with nothing on their minds but a 44-24 beating of the Denver Broncos.

But it says something about the character and talent of the men that months later they were still busting their butts, still working hard, if not always the way the coach and his staff wanted. They didn’t give up. They did not fill-up media notebooks with complaints, they did not tweet their unhappiness for all to see.

They kept working. If that’s not something that should be part of the "right 53 players" I don’t know what would be. These are two guys with talent, two guys with heart, two guys with guts and Pioli and Haley should find a way to get about two dozen more of those types of players on the roster.

There is no one way to build a football team. There is only one requirement if a franchise wants to win – they’d better get talented and motivated players on the field. They can be the right 53, or the wrong 53, or the maybe 53s, or the so-so 53s, but the only way success comes is with motivated talent.

And when that talent is there, it’s up to the head coach and his coaching staff to find a way to get the best out of that talent. It doesn’t matter how those players got to the roster; no decisions should ever be made based on who drafted or acquired a player. It should always be based on talent. That’s what wins football games.

Column: Don’t Count Out The Longhorns from Bob Gretz

Charles could have gone back for more in the game’s final moments and possibly challenge the NFL record of 296 set by Minnesota’s Adrian Peterson in 2007.

But Charles asked Haley to remove him from the game in favor of rookie Javarris Williams.

"I didn’t want to do it like that," said Charles, suggesting the record would be cheap if achieved in a lopsided game like Sunday’s. "I’ll get it some other time."

Charles has a record-setting day for Chiefs from KC Star

Larry Johnson got himself in trouble again, was suspended and then sent packing. Kolby Smith was still coming back from his 2008 knee injury and would end up on the injured-reserve list again. Opportunity came to Charles because he was the last man standing.

In the last eight games of the season, Charles ran for 968 yards on 161 carries, an average of 6.01 yards per carry with seven touchdown runs.

On Sunday in the mile high air of Denver, Charles was still standing, still fighting, running fast, running hard and that combination was impossible for the Broncos to stop. He started with 54 yards in the first quarter, and then 59 yards in the second period, for 113 yards at half-time. The third quarter brought 55 more yards, getting him past the 1,000-yard mark that everybody wanted to see him accomplish.

Then, the fourth quarter and Charles carries four times for 91 yards, including a 56-yarder for his second touchdown of the game.

Jamaal Runs Into The Record Books from Bob Gretz

It was Johnson’s second INT return for a TD that really pushed the Chiefs over the top against the Broncos. They held a six-point lead after Ryan Succop hit a 47-yard FG early in the fourth quarter. Denver’s offense took over and that’s when Johnson stepped up.

"I was actually supposed to be blitzing on the other side, but I read the quarterback and he was looking down on his receiver really hard and I got in front of it," Johnson said. "I don’t know how I caught the ball. It was a blur in there. It came really fast.

"I thought somebody was going to catch me, but I was all by myself."

There were times this year when Johnson felt all by himself as he sat in the Chiefs locker room. A starter in each of the games during his four previous seasons, he was moved to a role as a nickel linebacker and Johnson wasn’t sure why. Eventually, he tried to make the best of things.

The desired results didn’t come until Sunday, when the Chiefs were able to finish their season on a high note by routing the Denver Broncos 44-24.

But general manager Scott Pioli said he has been seeing the indicators all along that Todd Haley was the right coach to guide the Chiefs through these turbulent times and on to better days.

Foremost, Pioli said, was that the Chiefs continued to play hard for Haley despite their record, which will stand at 4-12 in Haley’s first season.

"He coached very passionately and he coached hard," Pioli said in confirming Haley would coach the Chiefs again in 2010. "There were a lot of reasons at different times of the year for this team to quit and the players to quit. But they didn’t, and clearly they responded to his coaching.

The most consistent part of the Chiefs game all season has been the work of their special teams. It wasn’t always perfect, but Steve Hoffman’s group was generally very reliable and productive.

Colquitt finished the season with the best net punting average in franchise history, at 40.8 yards. It was just two years ago that a 40-yard net had not been achieved in decades by an NFL punter. Now, Colquitt joins a group headed by Oakland’s Shane Lechler that has topped that mark.

He also had 41 punts inside the 20-yard line and that’s just one off the league record of 42.

Charles is making me think differently about the Chiefs. They have an offensive identity. They have a home-run hitter in the backfield, a guy who will make the opposition respect the play-action pass on first down.

Charles can make Cassel a better quarterback the same way Charles improved the offensive line. If the Chiefs add a legitimate No. 1 receiver or a talented rookie receiver, a new center and develop a competent tight end, they’ll field a solid offense next season.

Fixing the defense won’t be as easy. But it might start with Haley making peace with linebacker Derrick Johnson.

D.J. is another player who has kind of forced the coaching staff to think differently about him. Johnson scored two touchdowns on Sunday, running back two Kyle Orton interceptions.

Chiefs can put their faith in Charles from KC Star

For the record, Josh McDaniels didn't bench any of his defensive players going into Sunday's pivotal regular season finale against the Chiefs.

The defense that played in that 44-24 loss to Kansas City consisted of the same 11 starters who lined up together at Cincinnati, way back on Sept. 13.

Sure, there were minor changes along the way -- notably at the nickel cornerback spot, with the addition of Ty Law -- but the players who allowed the Chiefs to rush for 317 total yards (259 of it by tailback Jamaal Charles alone) Sunday afternoon were the same guys who at one point this season were among the NFL's top-rated total defenses.

But after that embarrassment, something changed. The undertalented found skill. The incompetent found intelligence. The path to success became clearer. The ability to resist became stronger.

The team, which began the month losing to other undertalented, incompetent and overpaid losers, ended it by first competing down to the wire, on the road, against a playoff team. The team then destroyed the Denver Broncos in a role reversal, denying them a chance at a playoff berth. It was sweet, perfect revenge, the kind you usually only see in Hollywood movies.

The team, of course, is your Kansas City Chiefs. If you were looking for progress, you just found it.

According to Broncos sources, the problems with Marshall and Scheffler came after team leaders including Brian Dawkins, Champ Bailey, Kyle Orton, D.J. Williams and Daniel Graham all met with McDaniels on Monday and encouraged him to take a hardline approach in preparing the team to finish the season against the Chiefs.

"We had the guys that wanted to play in the huddle,'' Orton told the Denver Post. "I appreciate coach for his decision. We're trying to win games and we're trying to build something special. And sometimes you have to make tough decisions. And I stand behind him and I know the other guys do as well.''

That development, combined with a home loss to the Raiders, compelled McDaniels to emphasize the need for accountability in a full team meeting Wednesday. It was later that day when Marshall complained about his hamstring.

Scheffler was presumably demoted to the scout team after he was overheard telling teammates that he couldn't wait for Denver's season to end.

Romeo Crennel is expected to return to coaching in the NFL by joining the staff of the Kansas City Chiefs next season, according to to multiple league sources.

Kansas City wanted to hire the former Cleveland Browns head coach as its defensive coordinator last offseason, but his hip surgery made it too challenging a prospect.

Hiring Crennel would be one of the first steps it would take in its defensive makeover. Clancy Pendergast is the current defensive coordinator for the Chiefs.

MrKolbySmith Awww. Chiefs start 1-0 in 2010. RT @MsTCaldwell: It's over for my Redskins. We're going to be better next year.

kb_kcstar For the record, the Chiefs' personnel people like Derrick Johnson very much. I think if DJ were to leave, it'd be his decision, not KC's.

DisFanReview: HAHAHAHA My CHIEFS knocked the BRONCO&apos;s outta the Playoffs! That game was so like the SuperBowl to me. WHAT A WONDERFUL DAY!

SpenDocta: I am pretty excited that the Chiefs ended the Broncos season today. Have fun sitting in Denver bitches.

silver5liter: @Adam_Schefter How soon do you think we can expect the chiefs to hire crennel?