Chiefs Coach Has Talked to Crennel, But Not About Joining Chiefs

Share All sharing options for: Chiefs Coach Has Talked to Crennel, But Not About Joining Chiefs 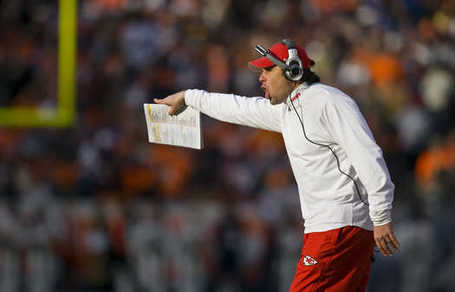 As many of you know by now, Adam Schefter of ESPN has reported that the Kansas City Chiefs are "expected" to hire Romeo Crennel as their next defensive coordinator. The announcement of a new defensive coordinator isn't surprising in itself. Current coordinator Clancy Pendergast was a late hire and hasn't produced many results with the '09 version of the Chiefs defense.

The report that Crennel would be the Chiefs choice isn't a surprise either considering the Chiefs connection:

However, Haley tells Adam Teicher of the Kansas City Star that, while he has talked to Crennel this season, it hasn't been about becoming the Chiefs next defensive coordinator.

"I know Romeo," Haley said. "He’s a friend of mine, and I worked with him for a handful of years. I’ve probably talked to Romeo four or five times this year but not specifically about coaching here. I would never do that to the guys here. They’ve been working their butts off."

Haley's assistants have been pretty loyal to him so I've gotta think that he respects that and doesn't have some sort of backdoor deal to bring Crennel to Kansas City. I'm not saying it won't happen. Just not yet.

One of the most telling signs of change to come in Kansas City was Haley's acknowledgment that his coaching staff was a "two-year process" because he was the last head coach hired in the last hiring cycle.

"That’s something I’ve got to be right on is the staff," he said. "I thought coming into this it was a two-year process potentially just because of how late in the game I got hired. It was in February when I was hired. All the other staffs had been hired."

If that doesn't tell you coaching staff changes are coming then I don't know what will.