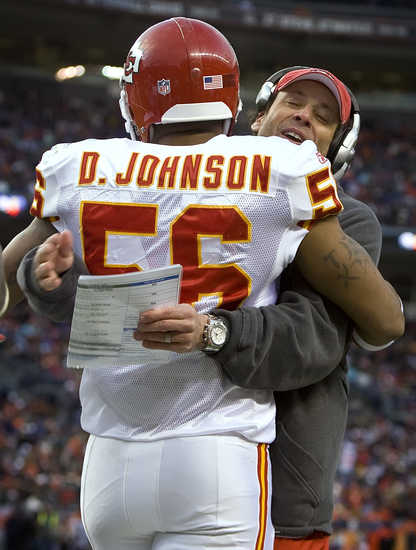 It would have been easy for Kansas City Chiefs LB Derrick Johnson to say, 'I told you so', following Sunday's game against the Denver Broncos. Johnson played a huge part in the 44-24 victory with two interceptions, both returned for touchdowns.

This comes after he was what appeared to be an offseason casualty of the new regime in Kansas City.

A first round pick, and thought by many the Chiefs best linebacker, Johnson was relegated to more bench time than what he was used to. No reason was really given for DJ's demotion but, as he's said before, it is what it is.

"Sometimes," DJ said after the game yesterday, "you have to play the cards you're dealt but at the same time you know everyone around here has great intentions. I'm just trying to make a play every time I get on the field. That's the main goal - not looking at the situation and just going out there and playing football."

I was thinking this game was almost a vindication for DJ. Riding the bench more than usual, with a lot of folks pointing out his playmaking ability, however inconsistent that might be. But, no, he took the game in stride without pointing any fingers.

"You don't have to always agree....all the coaches have great intentions so it wasn't anything about doing anything bad to Derrick Johnson."

The man responsible for DJ's playing time, or lack thereof, said yesterday that he was proud of the way DJ responded.

"Another guy I gotta take my hat off to," Chiefs head coach said of Johnson. "Another guy that's been knocked around a little bit and had to sit back. I know he believes in himself as a player.

"Anytime what you believe is not what's happening, it's frustrating and can lend to destructive action or results. That guy has continued to come out everyday, practice, work...and today he was able to come up with a couple big plays to help us."

DJ said earlier in the season that he wasn't exactly sure why he was relegated to more bench time but did tell Haley that he wasn't content with it. He told him he wanted to play more and, if he has anything to do with it, he won't be playing a similar role next season.

"I don't want to [play the same role next season]," he said. "I want to play. Did I think I would be playing the role I'm playing? No, I never would've dreamed of it. At the same time, you have to make the most of what you have."

DJ certainly made the most of his time yesterday.