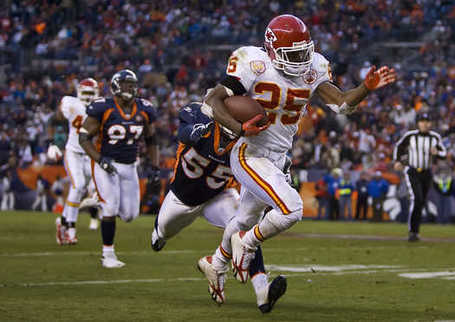 The Denver Broncos have spoken and they believe Kansas City Chiefs RB Jamaal Charles is...

Charles of course racked up the 8th best day in NFL history yesterday afternoon in Denver with 259 yards rushing.

"Whenever that happens it's never just one thing," McDaniels said of giving up over 300 yards rushing. "There's no way that it was one reason. We missed some tackles. We certainly let him around the edge a few times, I know that."

That could easily be the Chiefs head coach talking about Cleveland Browns RB Jerome Harrison and his 286 yards the other day. Luckily for Haley and the rest of the Chiefs, McDaniels was talking about our own Jamaal Charles.

"He cut the ball back and parted our defense a few times," McDaniels continued. "He obviously created some big runs. He's a great player, he really is and he's got a bright future in this league certainly. We're going to have to play him for a long time."

That last line is awful nice to hear. This likely isn't the last time Charles has sliced the Broncos defense.

"Just not sound defense," Broncos DE/OLB Mario Haggans said of the Denver rush defense. "On the whole, we didn't do it and they were coming from everywhere.  We had a lot of good calls and we just had to make plays and we didn't make those plays.

"Jamaal Charles had a heck of a year and he continued that today."