Haley Challenged Chiefs' Charles This Week to get 200 Yards

Share All sharing options for: Haley Challenged Chiefs' Charles This Week to get 200 Yards 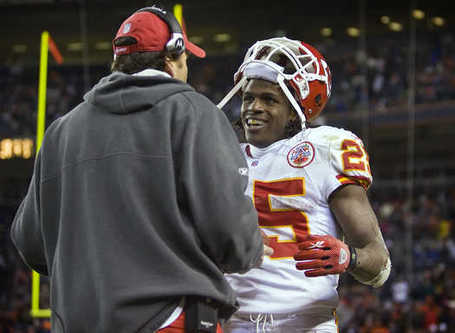 As we all know by now, Kansas City Chiefs RB Jamaal Charles set a franchise record with 259 yards rushing against the Denver Broncos today. He did this on 25 carries, or over 10 yards per carry. Amazing, really.

Well, the Chiefs had a little extra motivation heading into Sunday's contest.

Chiefs head coach Todd Haley actually challenged the Chiefs offense earlier this week to get Charles 200 yards rushing against the Broncos. Charles said his goal was 139 yards, enough to reach 1,000 for the season, but that he'll "take 200 if he wanted me to get 200."

"[Haley] told me, 'Jamaal, what plays do you want?' and I told coach Mo what plays I love running and he gave me an opportunity to pick the plays I wanted," Charles said.

Haley actually had Charles yell that number (200) out to the team at one point during the week.

The Chiefs achieved a couple of their goals according to Charles including knocking Denver out of the playoffs, scoring over 30 points and, of course, getting Charles over 200 yards.

Charles ended up with 259 yards rushing and there was a point where some wondered whether the Chiefs coach would send him back out to make a run at the all time single game rushing record of 296 yards.

Instead, Haley says Charles requested that rookie Javarris Williams be put into the game in his place. Why?

"I want to get it where I'm in the game when people are competing," Charles said. "People give up at that time [of the game] and don't really care. I could have gone in the game but I just decided I'm just satisfied right now. I'll get it some other time."

I think most of us will take 259 yards any day of the week.