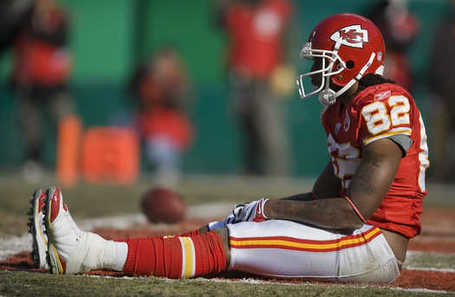 Good Morning AP! Game Day! A late start today since the game is out west. Here's to hoping we can help the Bronco's have a crappy start to 2010.

The Chiefs are 3-12 and ready to turn the page. They’ll play their final game of this season today at Denver. Coach Todd Haley said the offseason will give the team a fresh start. He says the Chiefs need it. No one needs it more than Bowe.

"Two thousand nine," he says on New Year’s Eve, "I wish I never knew you. By far, 2009 had the most obstacles I’ve ever faced as a young man. I’m not even saying as a professional. Just all around: a death in the family, never getting in trouble for nothing and then getting suspended, coming back. It’s been a steppingstone.

Bowe, Chiefs ready to put season behind them from KC Star

What should we make of this little nugget from the pile of numbers known as NFL statistics:

The numbers say the Broncos have not recovered from running all over the Chiefs a month ago. It’s like they shot all of their energy and enthusiasm that day in the ground game. Since then they have run for 95, 80 and 70 yards.

On Sunday, we will find out if the culprit behind the Broncos great success on the ground a month ago was the Chiefs defense, rather than the Denver offense.

These teams are four weeks removed from Denver’s 44-13 victory at Arrowhead. While the Chiefs killed themselves with an absolutely miserable stretch of horrid football in the third quarter, they weren’t competitive the rest of the time either. There’s no reason to think they will be able to make things much different this time. Look for them to keep the final margin closer, but that’s it.

As the Chiefs walked past the Oakland dressing room before the 1969 AFL Championship Game, they couldn’t help but notice the Raiders’ luggage was already packed for a trip to the Super Bowl.

That’s all the motivation the underdog Chiefs needed.

The Chiefs, bolstered by magnificent defensive performance in which they intercepted four passes and had four sacks, defeated the Raiders 17-7 in the final AFL Championship Game. The Chiefs earned the right to meet Minnesota in Super Bowl IV and became the first AFL team to reach the Super Bowl for a second time.

The Chiefs, meanwhile, have long since resigned themselves to another postseason-less season, and progress could be attained by Todd Haley's team if it simply avoids further embarrassment on Sunday.

Kansas City has lost five in a row since upsetting the Steelers in overtime back on Nov. 22nd, and has allowed more than 40 points three times during its five-game skid.

Last week's somewhat respectable 17-10 loss at playoff-bound Cincinnati dropped the Chiefs to 0-13 in the month of December since the team scored a 35-30 win over the Jaguars on Dec. 31, 2006

Fading Broncos try to finish with a flourish vs. K.C. from The Seattle Post Intelligencer

The Broncos have won eight in a row at home against Kansas City, which will finish last in the conference. The Chiefs, though, are primed to play spoiler.

‘‘They came in here and embarrassed us,’’ linebacker Demorrio Williams said. ‘‘Now our team’s a lot better. I think our team’s going to pick it up and go out and take care of business.’’

Kansas City has lost five in a row, but feels good after playing tough in last week’s 17-10 loss to AFC North champion Cincinnati.

‘‘We’re finding a little bit of an identity, and I think that’s very important for players,’’ first-year coach Todd Haley said. ‘‘We’ve got a long ways to go, but I think there has been progress. And I think the guys feel that and they’re feeling better about themselves each and every week.’’

Chiefs aren't Broncos' only obstacle in finale from The Pueblo Chieftan

"I just hope we’re focused on (our) game," head coach Josh McDaniels said. "I know there are a lot of other factors that are at play, and there are so many different scenarios that if you’re sitting there trying to calculate all those you might miss the first quarter.

"I think we should just focus on the Chiefs, get ready to play and go out there and coach and play as hard as we can (today), and then whatever happens, whatever they tell us to do on Monday morning, that’s what we’re going to do. We’ll see how it all unfolds."

Part of today’s storyline includes how much, if at all, the Patriots and Bengals will try to win their games. Other than trading the third and fourth seeds in the AFC, those teams have nothing to play for. If the Bengals deem tonight’s game to be unimportant, that could cost the Broncos.

Denver focusing on Chiefs, hoping dominoes fall in its favor to land playoff spot from The Longmont Times-Call

Brian Waters, guard, Kansas City Chiefs: Established the Brian Waters 54 Foundation in 2004 to help the less fortunate in his hometown of Waxahachie, Texas, and the Kansas City and Dallas areas.

Without the help of any paid staff, Brian and his wife, Yolanda, work closely with more than 20 agencies to make sure the neediest don't fall through the cracks.

"All of my accomplishments on the field would mean nothing if I couldn't contribute to my community," Waters said. "For me, the gridiron serves a greater purpose."

For the first time, players are publicly acknowledging a division in the locker room. Tight end Tony Scheffler, deactivated along with receiver Brandon Marshall for today's regular-season finale, said the move "doesn't sit very well with me or some of my teammates."

Meanwhile, first-year coach Josh McDaniels insists that a team without Marshall and Scheffler gives the Broncos their "best opportunity to win" today, an analysis so dubious from a football standpoint that it suggests McDaniels would rather lose with players loyal to him than win with players who are not.

The locker room appears to have broken into two camps — the roughly 60 percent of the roster McDaniels brought in and the roughly 40 percent remaining from last season. McDaniels has now feuded publicly with Marshall, Scheffler and former quarterback Jay Cutler, while substantially reducing the roles of Eddie Royal, Brandon Stokley, Peyton Hillis and Ben Hamilton, all holdovers from the Mike Shanahan regime.

Krieger: McD Fumbles in Us vs. Them Rift from The Denver Post

almighty31 In the studio feelin loopy

JoshLooney Who would have thought that denver in january would feel sweltering hot next to kansas city?

MNH99: Last Chiefs gameday in 9 months:-( Lets take those donkeys out of the hunt!!! GO CHIEFS