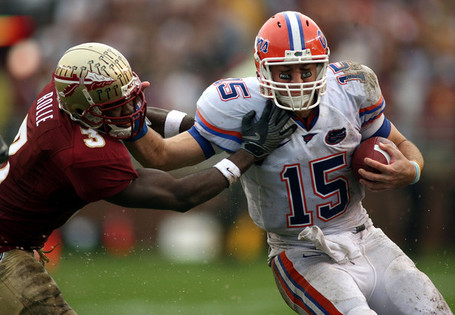 The Kansas City Chiefs spoke with CB Syd'Quan Thompson after practice today, according to DraftBreakdown.com.

The 5'9", 182 pound Thompson is a cornerback hailing from California and could also be used as a return man.

NFLDraftScout.com says he "proved himself to be the perfect zone corner. He was on top of receivers as soon as they made the catch when playing off the line, and made a nice fingertip catch on drills testing defensive backs' ability to track the ball over their shoulder on corner routes."

He's expected to be picked in the 1st-2nd round.

One of the more interesting players the Chiefs talked to yesterday was safety Myron Rolle out of Florida State.

I'm not sure if everyone knows his story so here's a quick version.

Coming out of high school, a few recruiting services rated him the No. 1 overall player and he chose Florida State. He had a 4.0 in high school and continued that impressive academic mark by graduating in 2.5 years. He had a chance to interview for the Rhodes Scholarship, a highly distinguished honor, hours before the FSU/Maryland game. The NCAA allowed him to take a chartered flight from the interview to the game.

He found out shortly before the game that he had won, becoming just the second athlete to be awarded with the honor.

Instead of entering the NFL Draft last year, he announced he would be taking a year off to study at the University of Oxford, where he ended up studying medical anthropology.

So, the biggest question scouts have been asking him is about his commitment to football.

Yesterday he also met with the Packers, Jaguars, Ravens, Steelers and 49ers.