The Greatest Kansas City Chiefs, By the Numbers: #42

Share All sharing options for: The Greatest Kansas City Chiefs, By the Numbers: #42

Calm down, Kansas City Chiefs fans. I know you read the title of this post and are on the verge of freaking out. Greatest Chiefs is back!

For those unfamiliar with my glorious series, I'm running down every Kansas City Chief, by the numbers, and we're voting on who the greatest players are.

More info on each of these guys and the full list of the player's we've done so far, is after the jump.

Milton Louis Carter was a short (5'9") cornerback who played just three seasons in the NFL, all for the Chiefs. He had three INTs as a rookie in 16 games. He played in 17 games over the next two seasons before falling out of football.

Cox was an undrafted free agent out of Georgia Tech in 2008. He has been the Chiefs starting fullback ever since he came on the team, playing in 27 games over the last two seasons. He has one rushing TD; 3 rushing yards and 98 receiving yards in his two-year career.

Cruz was supposed to be the heir to Tony Richardson's fullback throne in KC but knee injuries ended his career early. He played in 19 games over two seasons, barely touching the ball and doing a fair job blocking for Larry Johnson.

Donaldson was a long time Houston Oiler before coming to KC in 1990. He made a one-year stop in Kansas City before heading to Atlanta for the final three seasons of his career. As a Chief, he had three picks and started nine games. 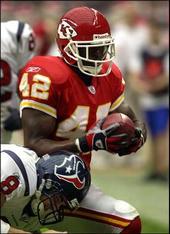 Harts was a 7th round draft pick by the Chiefs in '01 and spent his entire four-year NFL career in Kansas City. He played in 51 games and started 17 of them at safety. He had two INTs in his career, both in 2003.

Lane was a first round pick by St. Louis in 1968. He spent his final four NFL seasons in KC. His best season as a Chief was in 1976, when he rushed for 542 yards on 162 carries. He started fourteen games for the Chiefs that year and added in five rushing TDs. He finished his career in KC with over 1,200 yards rushing.

Malone was a sixth round pick by the Chiefs in 1992 out of Jacksonville State. He played in four games in 1992 and made three tackles. He spent the rest of his '92 season in Miami and finished his short three-year NFL career there. 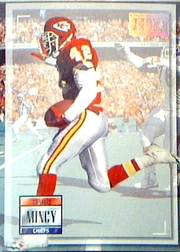 A fifth round pick by the Chiefs in 1991, Mincy played three seasons in KC and two of them were fantastic ones. His second year in KC, Mincy had four picks. He followed that up the next season with five more. He also had three fumble recoveries over those two seasons. He started every game of the '92 season at defensive back before heading out in 1994 for Miami and eventually Tampa Bay.

A kick returner/running back, I'd be surprised if anyone remember Lawrence Ricks. He was drafted in the eighth round of the draft by the Cowboys but played on the Chiefs in his first season. He had 23 rushing attempts and 28 rushing yards in two seasons for the Chiefs. He did not play in the NFL after his second season. 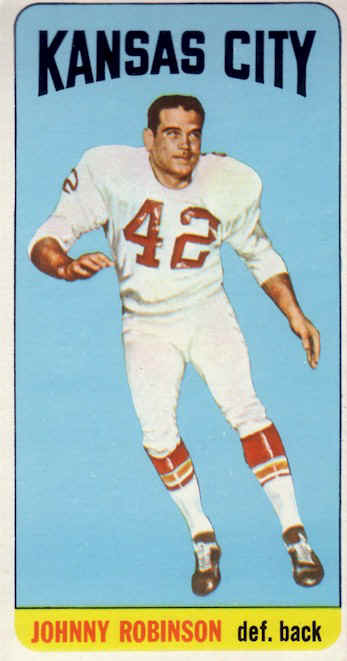 This is the guy who deserves to get the majority of the votes today. Here is his resume from Wikipedia:

Yeah, just vote for him now. He was good.

As close to a true local as we have on this list, Smith was born in Wichita, KS, and played college football at Nebraska. He was a running back and kick returner for the Chiefs after being drafted in the 10th round of of the 1985 NFL draft. Smith had 396 yards rushing on 120 attempts and returned 91 kicks over two seasons.

Not much to say about Washington. He played in two NFL games in his career, registering zero stats. He split his one NFL season between KC and San Francisco.

Have at it Chiefs fans. Who is the greatest Chief to wear #42?