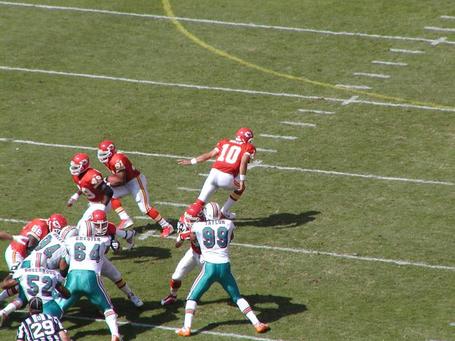 A couple of big football games today. Former Chiefs will be playing big roles. Today we start off with an article by Jason Whitlock that I think everyone will like.

Richardson, 38, will someday retire with the satisfaction of knowing he beat incredible odds — playing 15-plus seasons as an undrafted running back — and played an integral role in the careers of Marcus Allen, Priest Holmes, Larry Johnson, Adrian Peterson and Thomas Jones.

"This has definitely been a blessing," Richardson told me Saturday morning on his drive to work. "People forget that I started out as a practice-squad player with Dallas."

What a remarkable journey for one of the best human beings to ever wear a Chiefs jersey.

The 2000s was the most successful decade in franchise history for the Chiefs when it came to running the football. That was thanks to the strong legs and ability of Priest Holmes and Larry Johnson.

Among the league’s 32 teams, the Chiefs finished ninth in rushing yards over the decade, averaging 122.4 yards per game. That was just less than 12 yards per game behind the rushing leader over the 2000s, the Denver Broncos.

Stats Roundup: A Decade Of Rushing from Bob Gretz

Tickets to the Super Bowl are ready to be punched on Sunday as the AFC and NFC Championship. The games will go down in Indianapolis and New Orleans, with the home teams both favored to win.

Some of the best players in the game today are ready to play for a chance to become the 44th winner of the Vince Lombardi Trophy.

Blackledge starred as a quarterback at Penn State, then spent seven years in the NFL with the Kansas City Chiefs and Pittsburgh Steelers.

Blackledge to Speak at HOF Luncheon Club from Canton Rep.com

almighty31 At the airport mad early. Where do I go

almighty31 Jus saw a guy walk past wit his skinny jeans roled up like capris n his button up roled up. Oh wit pink headphones. SMDH

almighty31 Jus landed. The longest flight ever. Wat up KC!!!!! Holla at me

JWilliams48 You learn to live life through the lessons life teach you...pay attention to detail and don't miss a beat..

SI_PeterKing Vikes invade my hotel in N.O., sereneded by chants of "Brees on the Ground'' from fans out front.

GraceQuek Not sure if I needed to see Romeo Crennel shake his ample moobs after winning the East West Shrine Game. But the man can boogie.

BlondeGirlTrvl: @willszilveszter just like the Chiefs, my football team is awful too, but hey, you love who you love.

kxpx: I'm feelin' the Jets and Saints tomorrow... since my Chiefs are TERRIBLE... maybe @DonteWhitner will request a trade, we need safety help :)

Adam_Schefter A prediction: the Colts will not rest their starters to make sure they're nice and fresh for the Super Bowl.