Check out the trailer for Derrick Thomas: A Football Life here. 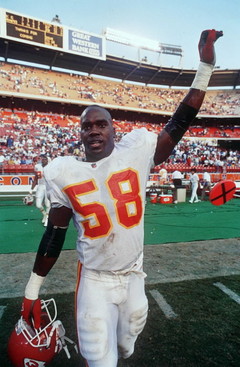 10 years ago on this day, Derrick Thomas was in a car accident that killed he and his passenger, Mike Tellis.

It's one of those times where you remember where you were. Everything kind of stops. It is literally unbelievable. Or maybe you just don't want to believe it.

Randy Covitz of the Kansas City Star talks about what he went through when he heard about the accident while covering the Rams and Bucs game in St. Louis.

"So, I intercepted Dungy as he came off the podium and informed him and Herm Edwards, who was Tampa Bay's assistant head coach and also a former Chiefs assistant, about the accident.

"I'll never forget how Dungy and Edwards set aside the bitterness of the loss to St. Louis and realized it meant little compared to Thomas' tragic accident."

After the jump, I've compiled some stories we've had on DT over the years.

Bob Gretz on Derrick Thomas
He showed up in the studio wearing a suit and the look of a man who had not yet been to bed. Turns out he had not slept. No, he had not been partying. He had been working. At the time, D.T. had bought a limousine and set up a limo service. The night before he had a reservation for the car, but at the last minute his driver had to back out of the assignment. So being the owner, D.T. became the driver. He threw on a suit, grabbed the keys and took care of the fare. It was a bachelor party that started in Kansas City, made its way to Lawrence and Topeka and then back to Kansas City. He dropped off his last passenger and came right to the studios.

AP Interview: J.J. Birden
Derrick was, first of all, just an unbelievable athlete. He was definitely one of those most athletic linebackers I've ever seen. He was very talented, a very hard worker. Game day, you had no doubt whatsoever that Derrick would show up. With some players, you wondered how they would do from day to day, but with Derrick, there was no doubt he was going to produce and cause havoc when the defense was on the field. Getting to know him on the field was cool, but getting to know him off the field was cool as well. He was a kind of a prankster and crazy and just that happy-go-lucky guy. Obviously, his death was so tragic, but I am happy to see him voted into the Hall of Fame. At this stage, he definitely deserves it. He definitely had all the tools and all that qualifies you to be a Hall of Famer.

Remembering Derrick Thomas: Arrowhead Addict
Arrowhead is the loudest stadium in the NFL, but it was at its loudest when Derrick was rocking the place. I’ve never seen a football player capable of hyping up the crowd the way he did. Sure, he had the uncanny ability to take over games late with his pass-rushing ability. It wasn’t just the way he took over games, though. D.T. communicated to the Arrowhead crowd with his body. He was in sync with us, and we were in sync with him. Derrick talked to us, and when he did it was sweeter than the sweetest lullaby our mothers ever sung to us.

Remembering Derrick Thomas: KC Chiefs Blog
If he were still with us today, I have no doubt in my mind that Derrick Thomas would be spending his Sundays up in the booth with Mitch Holthus and the only Chief he wasn’t better than, Len Dawson. And as sad as it is that we were never able to experience the guaranteed chemistry that trio of personalities would have generated, I will always keep with me the feeling he gave me every Sunday when I knew my team had the best player on the field. In the meantime, I will continue spending my Sundays the same way I have every week since 2000: waiting for the next Derrick Thomas. Something tells me that day is never going to come.

You see Derrick and I had a special connection forged by the fact that we both came to Kansas City about the same time. And Derrick was my first draft pick when I came to the Chiefs prior to the 1989 season. For the next decade, he was the cornerstone of the success of the Chiefs franchise. A decade in which our team, the one in which Derrick starred on, accounted for more than 100 victories. Derrick Thomas' career was meteoric and became a symbol for our team's success.