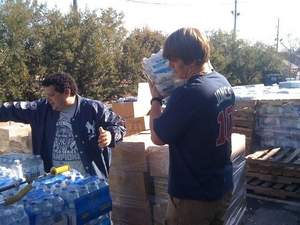 Kansas City Chiefs defensive end Bobby Greenwood was back in his hometown of Prattville, Alabama this weekend, where he is apparently a "fairly popular cult figure" because of his time with both the University of Alabama and the Chiefs.

A neighbor of his started an effort to gather as much drinking water and other aid to ship to Haiti and Greenwood, of course, was there to help.

"I am amazed at how the people of Prattville have come to the aid of helping those in need in Haiti. It is amazing. I mean little kids come by and give money from their piggy banks, things like that. What a wonderful tribute to the city of Prattville, but it doesn't surprise me," Greenwood said according to Jimmy White of the Prattville Progress.

Greenwood said he's visiting family and friends this week. His brother is on athletic scholarship at the University of South Alabama. He also said things are "looking good" for the Chiefs right now with the addition of Charlie Weis and Romeo Crennel.

He signed a futures/reserve contract a couple weeks ago meaning he'll be around when the team reports in March.

"I spent last fall with the taxi squad, learning the system. I've put on some weight, about 10 or 15 pounds since college, and I'm really looking forward to the new season. We will report at end of March. I really love my coaches with the Chiefs, and I look forward to gaining playing time this fall. They have experienced with me playing some offensive line, so you never know where I'll end up."

The Prattville Progress article also mentions that he and Brodie Croyle, both Alabama guys, share an apartment in Kansas City.