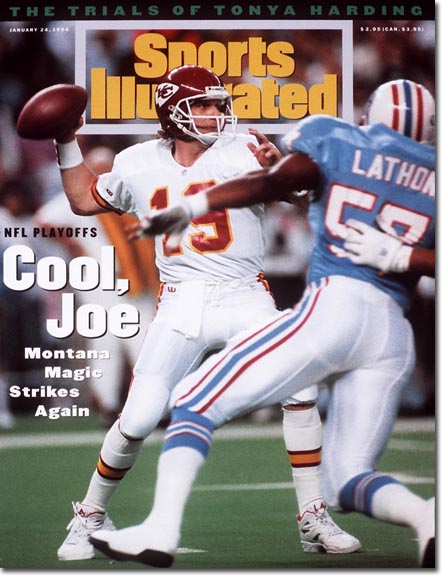 Here's your Kansas City Chiefs news from across the internet. Enjoy.

It’s conference championship weekend in the NFL. Pro football’s final four. Every fan of the league enjoys this weekend, but it’s something special for the cities of the four teams playing the games.

Remember how that used to feel Chiefs fans? Probably not, because it’s been so long since Kansas City has experienced that type of football excitement. In fact, it was 16 years ago Saturday.

That was the day the Chiefs were in Buffalo to play the Bills in the 1993 AFC Championship Game. It was the first championship game of any kind for the Chiefs since their Super Bowl IV victory over Minnesota in January 1970. That was 24 years between title games, and now it’s been 16 years since the Chiefs have stood on the doorstep of the Super Bowl.

It's hard to believe it's been 10 years since Derrick Thomas' fateful automobile crash on an icy I-29 that led to his death and the death of his friend, Mike Tellis.

I'll never forget where I was when I heard the news. It was halftime of the 1999 NFC Championship Game in St. Louis, the very game Thomas was headed to.

The news of the accident cast a pall on the game for me as I made my way downstairs of the Edward Jones Dome and ran into Chiefs president Carl Peterson, the man who brought Derrick to Kansas City and was there to watch Dick Vermeil's Rams play Tampa Bay.

One that will not only make Kansas City Chiefs players’ heads turn but one that will be among Division II’s elite for when Missouri Western athletes begin training for next school year’s seasons.

Williams received reassurance from Chiefs strength and conditioning coach Cedric Smith, head athletic trainer David Price, equipment manager Mike Davidson as well as several others in the organization when they visited the mammoth construction project off I-29 and heard the plans for the inaugural year of Chiefs training camp in St. Joseph.

"They said, ‘My gosh, this is better than Arrowhead (Stadium)," Missouri Western’s Athletic Director said, speaking in front of nearly 30 members of the Northwest Missouri Press Association on Friday at the St. Joseph Holiday Inn. "I said, ‘Well you helped design it with the intention of not making the same mistakes as Arrowhead.’"

Jose Perez, owner of two Mexican restaurants in the Prattville area, decided to put together a plan to gather drinking water and any other type of aid that could be shipped to Haiti to help in the suffering in the aftermath of the devastating earthquake in the Caribbean country.

The plan was going great as the people of Prattville rallied around his efforts and donations poured into a vacant building next to his restaurant, located on McQueen Smith Road.

He also got some unexpected help from his neighbor's son, who just happens to be a fairly popular cult figure of the city's world of sports celebrities.

Greenwood's dad just happens to live next door to Perez. When Bobby was growing up in Prattville, he often worked part-time at Jose's Cantina to pick up some extra spending money.

The younger Greenwood was happy to lend a helping hand with his former neighbor's endeavor by helping in the loading and unloading of the countless cases of bottled water and other items given by the citizens of Prattville for the aid in Haiti.

My renewal notice for 2010 came in the mail last week. Upper and lower level seating will remain the same. Last year the addition of the "Coca Cola" sections at $250 per season ticket, made becoming a season ticket holder affordable for many more fans and those return again as well.

Arrowhead Ticket Prices Remain The Same For 2010 from Arrowhead Addict

Before Kaeding missed three field goals in that 17-14 loss to the New York Jets, Elliott had been the last person to experience such postseason devastation. That misery occurred 14 years ago, when Elliott kicked for the Kansas City Chiefs. Elliott knew how quickly Kaeding's issues could spiral out of control.

It was the flow of the game that made Elliott especially uneasy: the way the Chargers had become more conservative on offense; the costly mistakes and mindless penalties by normally reliable players; the game-changing plays the Jets kept making.

Epidemic agony of the feet from ESPN

WhitlockJason Charlie Weis on my flight to Chicago. He was very nice to me. That went better than expected.

Adam_Schefter RT @MoveTheSticks: I know a college scouting director that likes Gerald McCoy better than Suh. I prefer Suh but McCoy is a big time stud too