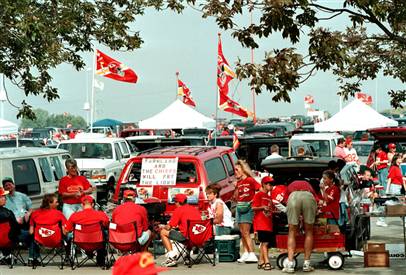 Morning! This is the "I might be hungover and running late for work edition" of Arrowheadlines. Here's your brief look at the news...

As we examined on Thursday, the Chiefs performance in bringing in players with NFL experience before the start of training camp was not very successful. On average, the players and their contributions graded out to a D-minus grade.

The success rate was not much better after the start of training camp in River Falls, Wisconsin. And, part of that was the domino effect from pre-camp failure.

For example, take the wide receiver position highlighted by veteran Chris Chambers (left). The new Arrowhead regime knew that was a weak spot on the club’s roster after the ‘08 season. A number of wide receivers were signed: Terrance Copper, Bobby Engram, C.J. Jones and Rodney Wright. By the end of the ‘09 regular season, only Copper remained and he was largely a special teams performer.

The Chiefs did not have many games of importance during the last decade.

But they did have some important players. Voting by our readers focused on a handful of players and two were at the top when it came to being considered the best Chiefs player of the decade:

And among all the voters, some of whom listed out their top 10 selections and even more, some 19 different p layers from the past decade were nominated.

Players Of The Decade from Bob Gretz

With the 2010 NFL Draft around the corner, the Chiefs will be looking to make a splash, with five selections in the first 100 picks. The Chiefs have many glaring holes on offense and defense that they need to address. With one of those draft picks, the Chiefs should really take a close look at Texas Longhorns wide receiver Jordan Shipley.

Shipley is one of the best wide receiver prospects in this year’s draft. At 6’0’’, 195 lbs. Shipley has great speed, quickness, and route running ability.

While watching Shipley play this year, I was reminded of one of the great slot wide receivers in the NFL, Wes Welker. If Kansas City wants to become the younger clone of New England, they’ll need to find their Wes Welker.

Jordan Shipley and the Kansas City Chiefs: A Match Made in Heaven? from Bleacher Report

Cover your eyes. I shit you not.

Lin Elliott (Edit by Joel: The kicker who shall not be named), former Waco High School and Kansas City Chiefs placekicker, will be the guest speaker at the Waco High Lions football banquet at 6 p.m. Wednesday at the Lions Den, 1716 N. 42nd St. in Waco.