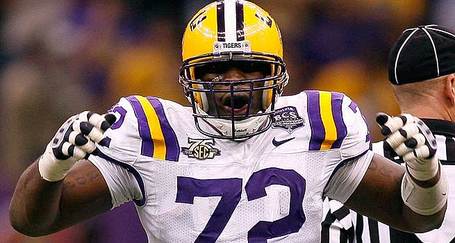 Today, another major media outlet is recognizing Dorsey for his play at LSU.

There was not a more dominant interior lineman during the past decade. As a senior in 2007, Dorsey helped lead the Tigers to a BCS national championship. He had five tackles, one sack and a forced fumble in LSU's 38-24 victory over Ohio State in the BCS National Championship Game.

Dorsey is one of the most decorated players in college football history, winning the Nagurski Trophy, the Lombardi Award, the Outland Trophy, the Lott Award and the Bednarik Award during his senior season. He was a two-time All-American and SEC Defensive Player of the Year. Despite being double- and triple-teamed throughout his college career, Dorsey finished with 179 tackles, 27 tackles for loss and 13 sacks.

Those performances led to the Kansas City Chiefs taking him with the 5th pick in the 2008 draft. At that time, it was considered a steal for the Chiefs because quite a few folks called Dorsey the most talented player in the draft. Add to that, defensive tackle is a position where talent is very difficult to come by.