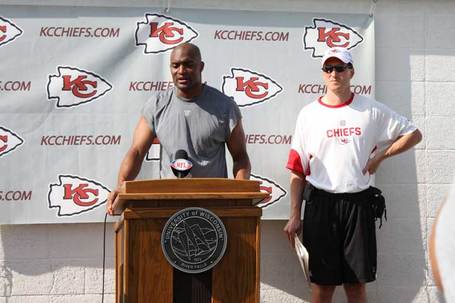 WR Amani Toomer is introduced at a press conference

Good Morning AP! Once again, your Kansas City Chiefs News from across the internet. Today, we start with a pretty damning review of last year's FA signings by Bob Gretz. Also, note the player tweets from an update on Kolby Smith's recovery.

The Chiefs football brain trust has spent the week in Orlando watching practices at the East-West Shrine Game. It’s just another step in the personnel process, along with next week’s Senior Bowl, the NFL Scouting Combine at the end of February and other events leading up to April’s NFL Draft.

That’s just on the college side. On the pro side, the evaluations go non-stop all year for players from the start of training camp through the Super Bowl. Last year, the Chiefs acquired 16 players with experience of some kind in the NFL before they went to training camp...

...Here’s a look and grade on each of the veteran free agents or first-year players signed by the Chiefs before the start of training camp in the ‘09 season:

Brian Schottenheimer grew up flinging the football to a Kansas state championship at Blue Valley High School. He was schooled in the Fun ‘n’ Gun attack at the University of Florida and followed that approach in his early years as an assistant in the NFL.

So what is Schottenheimer, the New York Jets offensive coordinator, doing by directing a power-running attack called Ground and Pound?

Rich Gannon had an immediate thought when he heard the Chiefs hired Charlie Weis as their new offensive coordinator, relieving head coach Todd Haley of the play-calling chores.

"If anybody’s ecstatic about this," said Gannon, the former Chiefs quarterback, "it should be Matt Cassel."

Rasheed Wallace was in a joking mood in the Celtics' locker room Wednesday, before returning to the Palace floor as an enemy for the first time since he signed with Boston last summer after 5 1/2 years with the Pistons.

He called a Detroit news media member by a nickname he gave him last season. He boasted how his beloved Kansas City

But he just laughed and walked away when asked if he could spare a few moments for the Detroit media. His custom of no pregame interviews hadn't changed.

Rasheed Wallace: Return to Palace was cool, wonderful from The Detroit Free Press

For the first time, the Kansas City Chiefs are a national sponsor of "Souper Bowl of Caring." This hunger relief program transforms Super Bowl week into the nation’s largest youth-led week of giving and serving. Schools, churches, and other community groups have raised over $60 million nationally since its inception two decades ago. The best part is that 100% of all donations go directly to food banks, soup kitchens, and other charities in our local market.

This year’s drive will take place in the weeks leading up to Super Bowl XLIV, on February 7, 2010. Now, we’re asking you to help us make this collection a success by joining our team. The Chiefs have four unique options for all Red and Gold faithful to step up and make a difference. You can easily join the Chiefs Souper Bowl of Caring team by participating in:

Chiefs Join With "Souper Bowl of Caring" to help Feed Hungry, Ask For your Help from The Mothership

"Chan is going to handle the offense. He knows it and he's very good at it," Edwards said. "But on the other side of the ball and special teams, who are the guys you are going to hire? He'll have to decide what kind of coaches he wants in there. That's the whole key as a head coach because you're only as good as the guys you surround yourself with. If he gets a good defensive guy to go along with his offensive expertise, it will be a positive first step."

Marcus Allen left the Raiders after 11 seasons because of a feud and contract dispute with Al Davis, when Davis called Allen a cancer to the team.

He went on to join the Raiders' hated rival, the Kansas City Chiefs.

During Allen's four-year tenure with the Chiefs, they won more games than any other team in the league...

...Allegedly, Allen put a hex on Davis by cursing a photo of him.

To this day, Allen keeps that picture in his freezer—and the Raiders will not win another Super Bowl as long as that picture is in Allen's possession.

And since Allen left, the Raiders have not won a single Super Bowl—although they got close in 2003.

NFL Curses: Ten Curses That May Be Plaguing NFL Teams from Bleacher Report

We just finished discussing the role of the defensive linemen in the 3-4 defense. If they’re not supposed to be the primary pass rushers, than who is? That responsibility would lie with the outside linebackers.

The group of players might have been the Chiefs best positional group as a whole in 2009. On one end you have the most feared pass rusher on your team, and on the other you have the "smartest player in all of football." Those two played virtually every snap when healthy, but when they weren’t the Chiefs got big-time production from their reserves.

Who are these guys? Let’s take a look.

Insider Blog: Time To Recap The Defense from The Mothership

MrKolbySmith My man!! It all started p the #theville with Rocco. Lol RT @kerryrhodes: Tune in to NBC to watch me on the couch w (cont) http://tl.gd/4hu3e

MrKolbySmith Not yet. Very soon? RT @MiaFBaby: @MrKolbySmith are you off those damn crutches yet?

almighty31 doin my books. gotta make sure my money rite

JWilliams48 Been home for almost a week now visited the family and ate a couple good meals...now time to get back right

Adam_Schefter RT @MoveTheSticks: Said all along that I thought Dez Bryant was better WR coming out than Crabtree. Havent found a scout/exec that disagrees

nubnquencandice: @ddockett add moving to the Chiefs to that list...(i hear there may be some sleeper$$$) hiding in the organization!

nubnquencandice: Goodnight all... I have #58 #Chiefs D.Thomas on my heart tonight. Don't know why but God has placed him her. Goodnight Falcon, R.I.H

Oscariinn15: @Arthurlaker13 EFF B Marshal!!! Unless he goes to the chiefs! Lol