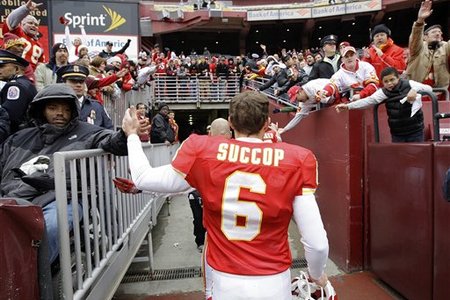 Your Kansas City Chiefs news from across the internet. Enjoy. Evidently our kicker is good. Who knew? =)

With one game to go, he’s had one of the most successful rookie seasons for an NFL kicker in many seasons. Over the last 25 years, only one other drafted kicker tops Succop’s FG percentage of 84.6 in his rookie season.

Succop has made 22 of 26 field goal attempts through 15 games. He’s not missed inside 40 yards and has only one failed attempt inside 50 yards. He’s hit FGs from 50 and 53 yards. He’s also made all 24 extra point kicks and he’s averaging 66 yards on his kickoffs; so on average he puts the kickoff at the opponent’s four-yard line. He’s got 50 of his 66 kickoffs inside the 10-yard line and six touchbacks.

The production on the field has been paired with Succop’s personality, which is best described as being unflappable.

...his rookie season has been good enough to get the Chiefs thinking their longstanding kicking problems are over, at least for the foreseeable future.

He appears a lock to become the Chiefs’ rookie of the year. He’s certainly been their most impactful rookie, not only making 85 percent of his field-goal attempts but also scoring all 12 of their offensive points in the win over Washington and hitting the game-winning field goal in overtime in another win against Pittsburgh.

Mr. Irrelevant has been Mr. Reliable for Chiefs from KC Star

Broncos Pro Bowl wide receiver Brandon Marshall will be benched for Sunday’s game against the Chiefs, for what coach Josh McDaniels indicated involves other factors in addition to Marshall’s hamstring injury.

McDaniels insinuated Friday that Marshall was exaggerating the extent of his injury and was unaccountable to the team. Marshall responded by noting McDaniels never played in the NFL and hinting he might be getting called out by McDaniels because the Broncos’ season is unraveling.

With Josh McDaniels" announcement that wide receiver Brandon Marshall will not play in Sunday's regular-season finale against the Chiefs, an already struggling Broncos offense will need somebody to break out against the Chiefs.

McDaniels basically announced Marshall won't play Sunday because of a "coach's decision," which amounted to McDaniels saying other players were going to play with injuries worse than Marshall's hamstring injury.

McDaniels also used the word "indifference" to describe the approach of players he did not want in Sunday's game.

Analysis: Offense will be a challenge vs. Chiefs from The Denver Post

The Denver Broncos won’t have all their weapons Sunday. The Kansas City Chiefs ought to be fully loaded, however.

This has been a rough year for the Chiefs, but when they visit Invesco Field at Mile High, they are expected to present more problems on offense than they did when the Broncos beat them 44-13 in Kansas City on Dec. 6.

"There are some different things that we’re getting ready for than when we played a month ago," Broncos head coach Josh McDaniels said.

31 Consecutive years the Kansas City Chiefs had at least one player named to the AFC team in the Pro Bowl, the league's second-longest streak, which ended this week. The San Diego Chargers' streak is now at 36 straight seasons.
This week in the NFL from The Milwaukee Journal Sentinel