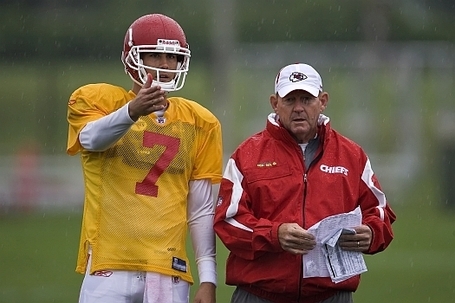 Morning AP! Here's your round up of Kansas City Chiefs news from across the internet.

There was a lot of going on Monday in the NFL coaching world and there were some familiar names to Chiefs fans involved in the activity.

Up in Buffalo, out of nowhere it looks like Chan Gailey (left with Matt Cassel) has a chance to be the new head coach of the Buffalo Bills. Yes, the man that Todd Haley fired as offensive coordinator at the start of September, could be one of the 32 leaders in the league as early as Tuesday.

Out in San Francisco, the 49ers hired Kurt Schottenheimer as their special teams coach. Schottenheimer sat out the ‘09 season, after leaving the Packers following the ‘08 season.

And with the Carolina Panthers, Richard Williamson announced his retirement after some 45 years in the world of coaching, including four seasons (1983-86) with the Chiefs on the staff of John Mackovic.

Step off the plane, and there’s Allen’s purple Vikings jersey hanging on the wall at the security checkpoint. Walk past Mall of America Field, and a poster of Allen’s menacing visage stares from the stadium walls.

Tune in Thursday nights and listen to his weekly radio show, or turn on the television and watch him pop on as a guest on the Vikings’ weekly television program.

Here’s round two of the questions you guys posed to me late last week. Round No. 1 was up Sunday night.

Again, thank you for participating and visiting the site.

What’s going to happen with the situation between players and owners on a new contract?

Benny Sapp does not lack for confidence, which is why he paid no attention to Herm Edwards when the former Kansas City Chiefs coach told Sapp he never would be an NFL cornerback.

Sapp was a free agent after four seasons under Edwards in Kansas City, and still looking for a team, when he called up his coach.

"He just told me I'd never be good enough to play cornerback in the NFL," Sapp recalled Monday.

You mean he wanted to make you a safety?

"No, I just couldn't play," Sapp said. "That was the last conversation I had with him."

JoshLooney A negative exp. can often lead to a positive end....good for Chan RT @JasonLaCanfora: Chan Gailey has become top candidiate in Buffalo

KCChiefsTribe: The Chiefs need to get a player who will get fans excited. We drafted D-line for so many years its gets boring to watch the draft.

ecoopersmith: @americopywriter between rooting for the Royals, Chiefs and K-State, I am ill-equipped to deal with the stress of rooting for a good team.

nubnquencandice: @shawnemerriman come to the Chiefs, we will respect and love you