If you can't beat them...zone them.

That is to say, zone block them.

When Larry Johnson touted the ball for Kansas City the offensive line was asked to do more "drive" blocks:  Man on man, lock them up, and drive them back.

In the last quarter of the season the Chiefs started doing more zone blocking for Jamaal Charles.  Charles, a speedster with good vision, seemed to thrive with the addition of more zone schemes.  Jamaal looked better, the line looked better...heck, the whole offense looked better.

So what where the Chiefs trying to do in the last quarter of the season?  What was the line being asked to do in the zone blocking schemes?

This post will review the basic tenants of the zone block and attempt to shed a little light on what the Chiefs were doing different in the last quarter of the season in regard to line play. 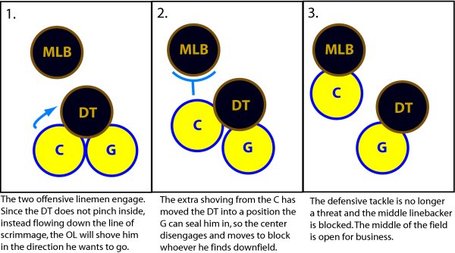 Frequently, two offensive  lineman engage one defender.  One lineman is responsible for "setting the block" while the other lineman, the one attempting the reach block, scoops the defender (or replaces his colleague's block).  This can be seen in the diagram to the right.  After the center (in this diagram) sets the block, he moves to the next defender over:  In this case a linebacker at the second level.

Many times the guard, in this diagram, may not get the DT scooped.  But that is ok.  That's because the back, who is fast and has vision, reads just that...and bam, he cuts back.  The guard, if he does not get his guy reached, is responsible for driving his defender where he wants to go.  And if the backs reads it right...then that would be out of the play.

Now that we know more of what the line was being asked to do...lets move to the scouting report.

The second half of the season started off with Haley & CO calling more zone blocking plays.  This allowed the Chiefs newly found gem, Jamaal Charles, a chance to showcase his speed and cutback vision.

As the season progressed Haley slowly added to his scheme and as a result made the line play more complicated to read for defenders.

More zone blocking was just what the doctor ordered.  Jamaal thrived in it and the o-line was better at it.  The offense improves.

Like a draw play, this gets the LB reading zone one way while the Chiefs are going another.  Many times all an NFL team needs is one step.  Waters and Smith start pulling more and I start changing my grading chart to include pulls.

At this point the Chiefs seem to be more confident in what the players have picked up from the new playbook.  A noticeable shift in scheme starts to develop.  It appears that the game plan has gone from basic and simplistic to more complicated and tactical.

Sometimes these new "dummy" blocks were run with the play action pass and sometimes just with a drop back pass.  However they ran it, the Chiefs were able to create a second of hesitation in the defenders secondary because they would initially read, run.  The Chiefs protection continues to improve by positing a seed of doubt in defenders minds.

This is a nice wrinkle for the run game.  The Chiefs o-line appears to be more successful with this type of drive block (that they used as a change-up).  On the initial o-line step (which is backwards) the defender reads pass and gets into "rush" mode.  This allows the line that little edge it needs to be more affective on the drive block.

With all this new line-play the Chiefs have the defenders thinking, "run...no pass...no draw...no left...no right."  Now, after tapping into this indecision in the opposing defense, Kansas City's run game gets even better.

Did anyone notice that Haley seemed to get better at calling the plays at the end of the season?  At least that is what most casual observers that I talked to told me.

Well, that "better" play calling coincided with the increase in line-play complexity.  In reality, Haley probably didn't go from a good play caller in Arizona to a moron in Kansas City.  But he did go from a team in Kansas City that had limited line-play at the beginning of the season to a more complex one at the end of the season.

Games are won in the trenches...and Kansas City started looking better at the end of the season because they were winning more battles in those trenches.