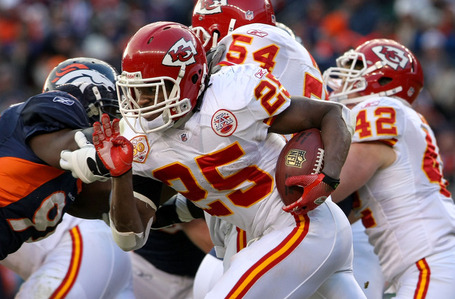 Kansas City Chiefs news from across the internet. Not a lot out there about our beloved Chiefs. Here's what I could find.

It’s one of the best weekends of the NFL season, with four of the league’s top teams in action with Super Bowl implications.

But it turned out to be pretty much of a dud when it came to exciting action, with only the fourth and final game really having any dramatics in the fourth quarter as the New York Jets beat the Chargers 17-14 in San Diego.

Lots of images and plenty of thoughts; no one asked, but here’s some observations, ideas, stats and opinions as the NFL reaches its final four.

Of course Crennel, like former coordinator Clancy Pendergast, prefers using a 3-4 defensive front over the more common 4-3 alignment. That said, the one position on the defensive side of the ball in dire need of an upgrade is the nose tackle position.

Another local youth isn't afraid to showcase her gridiron skills, either.

Darby, who qualified by winning regional competitions, beat out children from three states and was honored before the Chiefs' 44-13 loss to the Denver Broncos at Arrowhead Stadium.

Kansas City Chiefs: There are some decent rushing matchups in this slate, which is great for Jamaal Charles' chances of backing up his breakout 2009 season. St. Louis, Arizona, Indianapolis, Jacksonville, San Diego, Denver and Oakland all were in the bottom half of run Ds. Plus, KC gets to face Buffalo (30th in run D) and Cleveland (28th) thanks to its last-place schedule.

For Nick Lowery, the longtime Kansas City Chiefs kicker, those were important historical moments for practitioners of his craft, often a maligned group.

"The thing every kid who grows up wanting to be a kicker (imagines in his backyard) is a game-winning kick in the Super Bowl — this was the (ultimate) fulfillment," says Lowery, voted No. 1 kicker of the '80s by Sports Illustrated. "Those are two of the biggest kicks ever. We always knew kicking was important, but until Adam nailed it, that is when the (notion) was cemented. It was a dividing line for kickers."

Best Decade Ever by a Kicker? Adam Vinarieri Ruled the 2000s from USA Today

3. Kansas City Chiefs – Tyson Jackson DE, LSU – If the Chiefs tell anyone they are happy with the production they have gotten out of Jackon in his rookie year, they are definitely lying.  It’s not like they were expecting Jackson to be a 1o sack a year guy, but all he did was muster 38 tackles.  That is not very good for the money they are paying the third overall pick in the draft.

2009 First Round Class – One Year Later from FantasyPlayers.com

He doesn't think there will be an invitation to return to Foxboro, but there could be interest in Kansas City where Romeo Crennel, his ex-coach in Cleveland and his former defensive coordinator with the Pats, now is in charge of the defense.

While Crennel might not have made it as a head coach in his initial attempt, there remains little doubt about his abilities as a defensive coordinator. McGinest and Johnson were glad to see him back in an active role after a year off due to hip surgery, as Chiefs general manager Scott Pioli continues to enhance his collection of former Patriots personnel.

"I think RAC was born to coach. I loved playing for RAC," Johnson said, referring to Crennel by a nickname born from his intitials. "He's fair, he'll communicate, he'll dog-cuss you when he's got to, and he'll love you up if you did a good job. He just has a nice balance of when to press and when to pull back. He's great like that. I wish RAC the very best. They have a great coach in him, for sure."

Kansas City – The Chiefs are that guy who came to the audition and sang, hoping that the judges would ignore the huge scar he has over his eye due to a nittany lion bite and had just been in a car crash as well. The judges liked his personality but said no for this year. They advised him to get some therapy for his injuries and be back in the future.

NFidoL: A 2009 Year in Review…with a twist from WBRU