Billick Talks About the Chiefs Moving to a Crennel Coached Defense

Share All sharing options for: Billick Talks About the Chiefs Moving to a Crennel Coached Defense 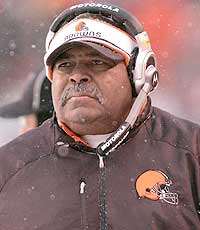 Billick talked with Adam Teicher of the Kansas City Star regarding the type of players Crennel requires for his defenses to be successful.

"His players don’t have to be front-line, No. 1 draft choice type guys," he said. "Having these players helps, but he’s very much about role-playing and finding guys to play those roles."

Billick said part of his niche is being able to match up the players he has with the scheme he's going to run. In other words, he's not plugging square pegs into a round hole.

"He’s not tied to an absolute rigid style of play. A lot of coaches like to moan and complain if they don’t have 11 first-round draft choices on the defense. He comes from a background where he’s found guys to plug and be productive wherever they come from."

The Chiefs don't have 11 first round picks on defense but they've got two top five picks on the defensive line alone.

This is certainly good news to hear regarding Crennel when you consider the current talent level on the Chiefs defense.