Share All sharing options for: The Chiefs Played in Super Bowl I On This Date 43 Years Ago 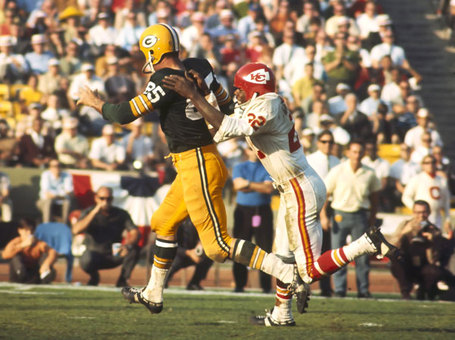 As NJ Chiefs Fan noted in Arrowheadlines just a bit ago, 43 years ago the Kansas City Chiefs played in the very first Super Bowl against the Green Bay Packers.

The Chiefs lost that day but it was the first step in proving to the other league that the AFL was legitimate.

The Chiefs had gone 11-2-1 and hadn't recorded a loss since October.  They split with their division rival Oakland Raiders that season but swept the Broncos by a combined score of 93-20.

Two weeks prior, they recorded a 24 point victory over the Buffalo Bills in the conference championship game.

Lenny was 16/27 for 211 yards in the Super Bowl. He threw one touchdown pass and one interception. Lenny was sacked six times while the Chiefs defense got to Bart Starr three times and picked him off once.

Here is the box score if you want to check it out.

Who knew this was the beginning of the greatest sporting event in America....