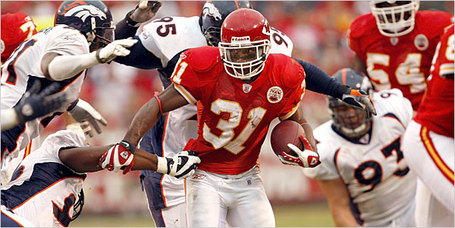 "My heart is still there in Kansas City with all the great things that happened over those seven years," he recently said on the Border Patrol on 810 WHB. He also mentioned that there are "tons of KC fans" in California.

As many of you know, Priest is a former Texas Longhorn, along with Chiefs LB Derrick Johnson. Priest spent a few minutes talking about DJ and where his future may lie with the Chiefs.

"With DJ, we know he still has a number of years he can play and be productive. We know what type of linebacker he is and what his strengths are.

"There are some things that may not necessarily be in the best interest of him by staying, [but] I still think it would be a smart move [to stay in Kansas City] for the longevity that he has and an opportunity to fit into the system. I know with coach Todd Haley, there's a certain way of going about business. It's either his way, or no way. I think that's a good precedent the coach has set. It's just a matter of can the players get on his program.

For what it's worth (not much), Priest wants DJ to stick around in Kansas City. Of course though, once a Longhorn, always a Longhorn, so he's going to support him no matter what.