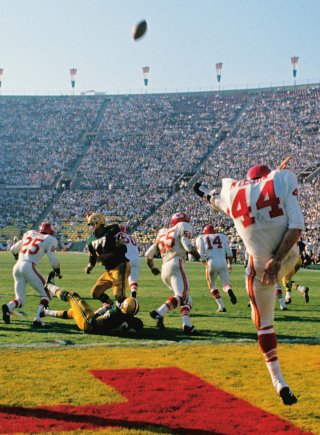 On this day, the Chiefs and Packers met in Super Bowl I. Today's dose of Kansas City Chiefs news from across the internet. Read, and learn.

Consider the Chiefs franchise like one of those hyphenated universities. It’s not Patriots or Foxboro West.

With the formal addition and introduction of Romeo Crennel as defensive coordinator on Thursday, the Chiefs believe they have the big pieces to their coaching puzzle in place. And while there’s a definite look of the New England Patriots to the picture these days, it really has more to do with Bill Parcells, the Big Tuna, the two-time Super Bowl winning coach and current czar of football with the Miami Dolphins.

Call them the Kansas City Tunas.

The Chiefs have tried this before. They’ve hired respected defensive coordinators to come to Kansas City to help fix their forlorn defense.

It didn’t matter. Through Greg Robinson, Gunther Cunningham and Clancy Pendergast, the Chiefs have been unable to play consistently good defense, or at times avoid playing horrendously bad defense, the last nine seasons.

Still, coach Todd Haley was insistent that this time, things would be different with the latest Chiefs defensive coordinator, Romeo Crennel.

One of the problems of being what amounts to a one-man business is that there are items that sometimes don’t get the attention they deserve.

That would be you the readers of this site and your questions to me.

With that in mind, I’m opening up the question box on the Chiefs and NFL football in general. Starting Thursday evening at 5 p.m. through noon on Saturday, attach your questions to this post and I will sift through your questions or comments and provide some answers by Sunday evening, Monday morning at the latest.

The Spice Girls were still spicy, Family Matters still mattered, and every guy I knew couldn't stop talking about Kate Winslet—whose tastefully displayed tatas made the Titanic one of the highest grossing films in box office history.

We all Mmmbopped along with Hanson, well, except for Monica Lewinsky who bopped on something else. The Cleveland Browns had turned black in Baltimore and Brett Favre stood atop the football universe (some things never change).

Despite all of the history and nostalgia , 1997 was an important year for several NFL franchises, but none more so than the Kansas City Chiefs.

almighty31 http://twitpic.com/y4xzj - Jus got home. @djlazyk @murdahbaby wish I could of came but in the meantime. We sip grand cru owww!!!!

almighty31 at the crib playin spades Broadcasting live now! See me at http://www.ustream.tv/channel/almightyallstars

WhitlockJason This Haiti disaster should put everything in perspective. We are so blessed here. It's not perfect but we r blessed. Remember that.

Adam_Schefter Raiders owner Al Davis and HC Tom Cable will meet again today, according to team official -- apparently they have a lot to discuss.

kentuckychrome: Covered in KC BBQ stank, courtesy of Stans in Issaquah. Any place out here that is covered in Chiefs gear and serves Blvd Single Wide is ok.

The610Cowboy: Its official. The Chiefs are slowly becoming a member of the AFC east. 3 Super Bowls in 4 years, let's hope results are the same

KrisKetz: @greghall24 Romeo was in the building yet does a newser by "phone." Just when you think Chiefs PR can't get stranger...

Kj1974: @SI_PeterKing After Crennel and Weis landed in KC did the Chiefs contact the spygate sideline camera operator for a possible position?