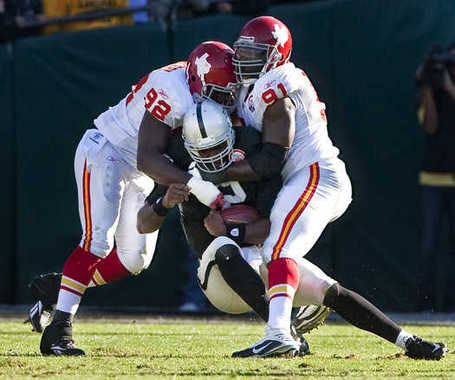 If Romeo Crennel has watched the Chiefs at all during the 2009 NFL season, he already knows the biggest challenge facing him when he takes over the club’s defense. If Crennel wasn’t watching, then he’s got a real bad surprise coming to him if/when he signs on.

There are a lot of hurdles the Chiefs must overcome to return to contender status. Scott Pioli, Todd Haley, Charlie Weis and soon it appears Crennel will have their hands full lifting all parts of the franchise.

The area that is the most important and needs the biggest change comes with their ability to stop the run.

Linta said Crennel has already discussed the coordinator’s position with Haley. That suggests Haley has decided to make a change.

Crennel is coaching this week at the East-West Shrine Game in Orlando, Fla. Linta indicated Crennel would like to have something resolved with the Chiefs quickly.

Crennel wants to work for Chiefs from KC Star

H/T to WtexKC in the FanShots

With his first season in the National Football League in the books, Eastern alumnus and current Kansas City Chiefs linebacker Pierre Walters said life as a professional is everything he expected and more.

"From the level of play to seeing all the athletes you watched growing up and idolized, playing with and against them was great," Walters said from his home in Forest Park.

"I had a lot of fun. I'm glad to get the first year under my belt."

Walters 'living the dream' in NFL from DenNews.com

As The Romeo Turns: A Love Story from Arrowhead Addict

Inside the green frenzy sat my boyfriend, Joe, and I, who were not dressed for the occasion. I wore purple. He wore blue plaid. We are bad Cardinals fans.

Fortunately, Arizonans allowed Packers fans to proudly sport green jerseys without fear of getting mauled. Fans in Philly, where I come from, would likely not have been so judicious.

Joe is a football fanatic, and although a devout Kansas City Chiefs fan, he scored tickets to Sunday’s decisive playoff game between the Arizona Cardinals and the Packers.

I used to despise football, thinking it barbaric. But then I began dating Joe, who watches ESPN while studying various sports statistics Web sites.

Needless to say, I’ve become used to the game, and learned to appreciate the preparation and heart that drives it. Football is one of life’s biggest dramas, full of risks, upsets and courage — and the occasional guy who shoots himself in the leg.

First football game a great experience from The Payson Roundup

Dawson's number 16 was retired by the Kansas City Chiefs.

NFL: The Top 25 Quarterbacks of All Time from Bleacher Report

MrKolbySmith Grew up wanting 20's. Footlocker told me I was a sz 26"

kcohio: When will Romeo Crennel sign with the Chiefs???

DocFluty: @BFlowers24 hope you get better soon! ...i got me my flowers jersey and hope to see you grow old with the Chiefs!

SKyNYrDCHiEF: @BFlowers24 hope your surgery went well, can't wait to see what the team can do with weis/crennel coming aboard! Go Chiefs!!!!!