Chiefs GM Says Kansas City Snow Has Nothing on the Northeast

Share All sharing options for: Chiefs GM Says Kansas City Snow Has Nothing on the Northeast

As many of us know, Kansas City Chiefs GM Scott Pioli spent much of his life in the northeast, growing up in New York and then working in New England for nearly a decade.

"What we've had out here so far - when I was talking to you out on the bus you mentioned that we were going to have a heck of a snowstorm.

"But, I said to you, when it's 3-4 or inches, or even 5 or 6, it's really just snow fall. When you start hitting feet, above 12 inches, then you can call it a snowstorm so we've only had snowfall out here so far."

If you've been in Kansas City the last few weeks, then you might want to dispute that. The snow has been coming down here at a ridiculous rate.

In fact, take a look at this picture down the street from my place. This is what happens when the snow plows come through: 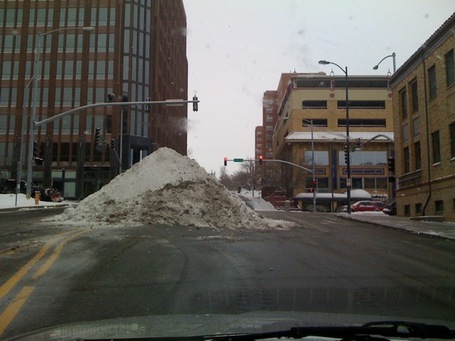