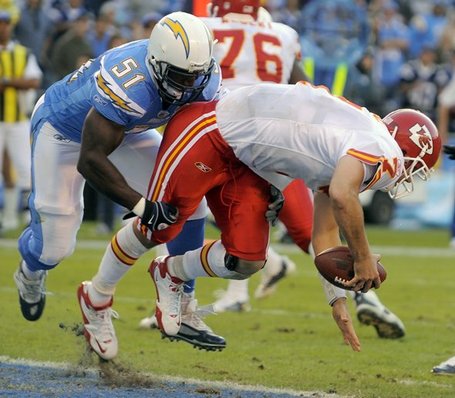 Oh, my head... seriously. As best I can, here is your Kansas City Chiefs news from across the internet.

It started with this question: do you think winning is a habit?

This led to a second question: is losing a habit?

"I don’t know that," said Cassel. "I can’t answer that question, honestly."

The last word said it all – "honestly." Cassel decided not to try to create some sort of answer that wouldn’t really be an answer. That’s because he knows that if winning is a habit, then losing can become a habit as well.

The Chiefs’ starting defensive ends haven’t been great. Glenn Dorsey and Tyson Jackson possess the defense’s most lucrative contracts and were the team’s draft picks in each of the last two years. But for all the money, time and expectation, backups Wallace Gilberry and Alex Magee are the ones who have combined for 6 1/2 sacks. Dorsey and Jackson have zero.

Larry Johnson’s game against his old team last week turned into a non-event for all the Chiefs except linebacker Demorrio Williams. The two got into a shoving match along the sideline in Cincinnati’s 17-10 win over the Chiefs.

"I didn’t say anything to him," Williams said. "He was talking to me. I guess he was trying to get himself going. He tried to stiff-arm me, throw me down. It didn’t work, did it?"

Johnson had 11 yards in four carries in the game.

The Congerville native and 2004 Eureka High School graduate possesses the football he recovered in the end zone 12 days ago for his first professional touchdown.

Although Studebaker certainly is glad to have the ball, he will take away something far more valuable from this season: the experience of playing behind a 13-year veteran and three-time Super Bowl champion.

Studebaker has served as second-string left outside linebacker, behind Mike Vrabel. The player who helped the New England Patriots win three NFL championships has been a trusted mentor for Studebaker.

Really Having a Ball from the Peoria Journal Star

The last time the Broncos faced the Chiefs — Dec. 6 — Matt Cassel and Brodie Croyle combined for only 16-of-43 passing for 134 yards and two interceptions.

However, this time the Chiefs will have Dwayne Bowe at wide receiver to go with Chris Chambers. The previous game against the Broncos was one of four that Bowe missed because he was suspended.

"(Bowe) is a very good player, a very explosive player," Broncos defensive coordinator Mike Nolan said. "He's also a size receiver, and I would anticipate it changes some of the things they do. He's one of their best offensive players, and naturally it will force us to adjust as well."

Bowe's Back, Giving Chiefs' Offense a Jolt from The Denver Post