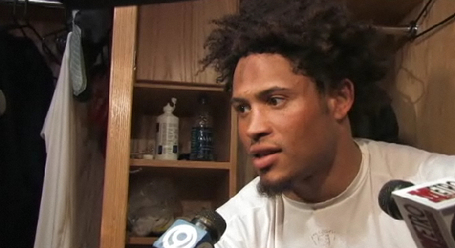 With the departure of safety Bernard Pollard, Kansas City Chiefs safety Mike Brown has suddenly become a very, very important part of the defense.  His arrival in Kansas City has been likened to the arrival of Rodney Harrison in New England.

Both are viewed as veteran leaders and both arrived at a time many thought they were on their last legs.

Following practice, Brown spoke to reporters on the defense, what he sees in the offense and the expectations of those outside the Chiefs locker room.

Video comes courtesy of Todd Feeback of the Kansas City Star.  You can view that here.  Below, I've taken some notes on Brown's words.

"I feel very confident in my role and my abilities.  I'm just a piece of the defense.  There's going to be 11 guys out there.

"Coach Haley has promised you guys we're going to play hard, be mentally tough and physically tough, and we're not going to quit.

"We expect to be good but talking about it and doing it are two different things.  We have to prove it every Sunday and it starts this Sunday."

There's more after the jump.

"To be honest with you, I don't think we even think about the offense.  Our job is to play defense, stop the offense and get the ball back for our offense.  It's not any concern of ours of what the offense is doing.

"We just have to go out there and play consistently, play tough and phsyical and I think that's what we're doing."

As a veteran, is this still an exciting time of year for you?

"Yeah, this is the most exciting time of the year. The first game of the season.

"We're going out there to play physical and play hard and get a W any way it comes.

What kind of mindset do you guys take into Baltimore with people expecting you to lose?

"It doesn't really matter what people think outside.  Everyone has an opinion.  You know what they say about opinions, so...

"We know they went to the AFC Championship game last year and played the Super Bowl champs really, really tough.  We know it's a tough environment.

"Ray Lewis, the heart of their team, is going to be really pumped up.  They're going to be ready to show the world they're ready to make another run but we're there to stop that.  We're going to go out there, play hard, give it all we have and try to get a dub."