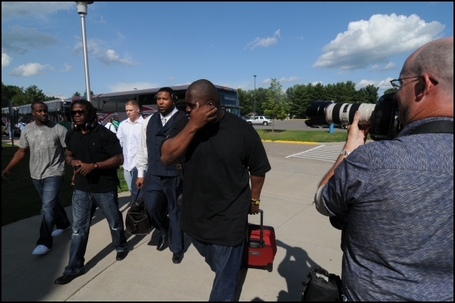 "I know a lot of people want to fall in love with the idea of wanting to be faithful to the team until you die because there’s a lot of that hometown feeling. This is a business, and as soon as they think you don’t fit, you are gone. So you have to make sure you maintain your business angle to it." -Brian Waters, June 5th, 2009

Kansas City Chiefs guard Brian Waters has hired Athletes First to represent him according to Liz Mullen of the Sports Business Journal.

Previously, Waters had represented himself.

This move is interesting to me. Many times when a player switches agents, it's because they want a new contract. Agents usually don't get paid unless they negotiate a contract for a player so, unless Athletes First plans on working for free, or Waters has some other financial agreement set up with them, I imagine they would be seeking a new contract for Waters.

That's just a hunch on my part.

In the past, I've wondered whether Waters being his own agent represented a liability.

I raised this question in light of the reported run-in between Waters and Todd Haley in February of this year and Scott Pioli's reported refusal to meet with the player absent an appointment.

A player generally operates on emotion. An agent will bring a level of reason and objectivity to the table, while at the same time fighting for the player. The relationship between management and player is different than management and agent. Your agent is there to speak for you and do what's in your best interest, usually from a financial standpoint.

Of course, I'm not going to act like I'm privy to the relationship and/or financial dealings between the Chiefs and Waters. It's just that previous history had indicated that when a player hires a new agent, it's usually for good reason.