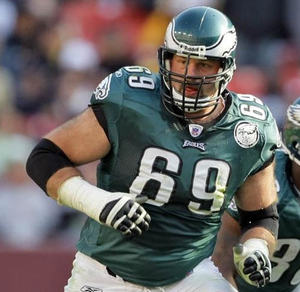 The possible addition of RT Jon Runyan is making waves among Chiefs fans, and for good reason. The right side of the line is well-documented as the weakest part of the offense of the Chiefs and that's not just a fan's opinion. Even the front office seems to be throwing everything but the kitchen sink into the RG and RT and, apparently, nothing's working thus far.

With Runyan in Kansas City for a physical, we asked JasonB over at Bleeding Green Nation for his insights into the longtime cornerstone of the Eagles offensive line:

My first concern with signing Runyan would obviously be his health. He had microfracture surgery on his knee in the offseason and was only cleared to start running a few weeks ago. So here's a 36 year old player, coming off surgery, who hasn't even been able to run all summer. Add in the fact that he's had back problems the past few years and there's red flags all over that one.

Jon Runyan is one of the NFL's great ironmen. He's second only to a punter for the longest consecutive games played streak amongst active players. He's a gamer in every sense of the word, he will play hurt, and can still play well. I don't know how smart it would be to bring him in and start him right away, but in a few weeks he'll probably be fine.

The good thing about a guy like Runyan is that he's never really relied on athleticism to play his game and that's allowed him to remain effective even though he's probably lost a step or two. He's smart, nasty, and frankly he knows how to cheat. If there's a lineman that gets away with holding more than Runyan, I'd like to know who he is... That's no knock on Runyan either. Good players learn how to get away with that stuff. Michael Irvin got into the hall of fame committing offensive pass interference on every other play. It annoys opponents, but it's awesome when he's your guy.

One thing I will note after reading some of the comments on your original post is that I wouldn't be expecting Runyan to come in and be a mentor to your young lineman. That's just not the kind of guy he is. Not that he's a bad teammate or anything, he's just a competitor and always wants to play. He's always come off as somewhat annoyed when he's been asked about "mentoring" younger players. He's not there to teach anyone, he's going to do his best to make sure those kids sit on the bench and never play. I never took this as a bad thing because that same attitude is what makes him such a ferocious competitor on the field.

Also, he's not going to want to be a backup. He never has and it's just not in his nature. Maybe at first while he tries to get back in shape... but soon he's going to want to play every down. He's been saying all summer that if the Eagles were to sign him back that he'd win the starting right tackle job no matter who he faced. Again though, that competitive attitude works for him.

All things considered, I like what I hear. Health concerns remain but his attitude actually seems ideal for the Haley-run version of the Chiefs and that attitude alone would mentor fellow players. Many thanks to JasonB for his thoughts.