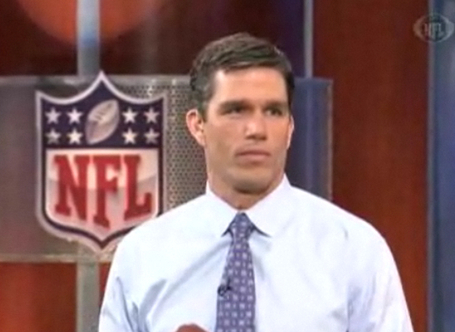 Despite retiring from his primary place of employment for the last decade and a half, Trent Green takes on another TV gig, this time being hired by NFL Network according to Randy Covtiz of the Kansas City Star.

He is scheduled to appear regularly on NFL Total Access, the evening show on six nights a week.

Green is also scheduled to work for FOX Sports calling games on Sundays.  On opening weekend, he'll be with Chris Myers calling the Lions and Saints game.  Two more stints with Myers and then four games with Chris Rose will wrap up his season.

Since the FOX gig will require his entire weekend (and some), he'll likely be on NFL Network earlier in the week.

He's previously been on NFL Network.  After he was released by the Rams earlier in the year, he made a few appearances on NFL Total Access.

On the move to the broadcast booth, he said, "I was blessed to play a long, long time.  I realize that.

"I always thought that I’d get into coaching. And as much as I think I would enjoy coaching, the amount of hours that they put in (is amazing). Family time is something that’s very important to me, and TV allows me to still have a family life and keep me in the game. So hopefully, it works out."