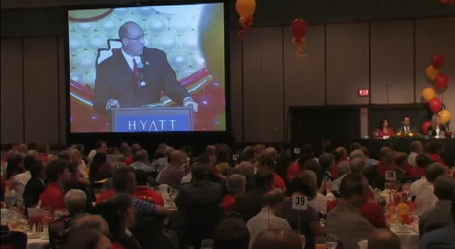 The two men behind the 2009 Kansas City Chiefs spoke at the Kickoff Luncheon this afternoon.

GM Scott Pioli promised hard work and nothing else.  He didn't step out and make a mythical five-year plan but kept the folks confident that they're doing everything in their power to make the Chiefs a winner.

Head coach Todd Haley, dressed in a suit for what might only be the third time since his February hiring, talked about what kind of players we can expect this year.

The video comes courtesy of the Kansas City Star and can be viewed here.  Our very own tomahawk44 attended the event so maybe he can tell us about it. After the jump, I've taken notes on what each of them said but the video is worth a look if you've got the time.

"Right now, we've got a group of young men that know what work is about.  Some of them needed to learn what work was about but they're starting to work.  And we are going to continue to work until the job is done.  There is no other option.

"That's what we can promise the city of Kansas City.  So, the group that's starting this season out, thank you guys.  And let's get it done." 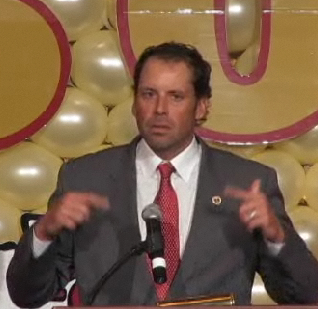 "Scott and I have worked very hard along with everybody else in finding what we've said is the right 53 for this team.  Not the best, but the right.  Everyone of these 53 that end up playing on Sunday for us, you all know in here will be a mentally tough group.

"If you're mentally tough, you're physically tough.  They go hand in hand.

"They will be a smart group and they will be a well conditioned group.  And that we know will give us the best chance to win week in and week out.

"And as Scott said, that's all it's about.

"Right now, I want to thank the Hunt family and Scott for giving me this opportunity to caoch this great franchise, and I want everybody here to know that, next to God and my family, it is all that I care about.

"In season, sometimes that gets a little out of order.

"You have my word and their word on that."