Share All sharing options for: Chiefs GM Scott Pioli Tried to Get a 7th Round Pick for Bernard Pollard 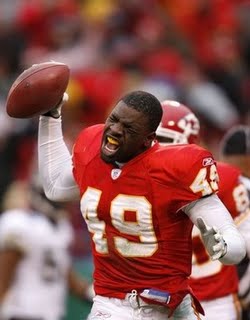 When the news broke of three year veteran Bernard Pollard being one of the names on the Kansas City Chiefs cut list last Saturday, there were a myriad of emotions, with most of them representing disappointment.

Apparently not, according to Peter King of Sports Illustrated.

"Bernard Pollard out," King writes in the latest MMQB.  "Chiefs GM Scott Pioli thought he might get a seventh-round pick for him, but no one stepped up."

So, heading into this thing, Pioli's judge of talent was pretty accurate.  I imagine the previous regime would have placed a higher value on Pollard.  Just a hunch.

The Lions just traded for Ko Simpson, yes for a draft pick, and he's got less tackles, interceptions and passes defenses.  They were both '06 draft picks.
We had previously heard the Lions were looking for safety help and declined an offer from the Chiefs that included DaJuan Morgan.  The Lions even went so far as to attempt to grab Lawyer Milloy.  A 35 year old safety, with 13 years in the league, over a 24 year old, three year veteran supposedly in the prime of his career like Pollard?

I've heard the theory that Pollard was cut by Todd Haley to make a statement.  Apparently not.  If no one else in the league would give up a seventh round pick for him then his services were pretty useless to not only the Chiefs, but plenty of teams across the league.

I'm very interested to see who the next team to pick him up is and when they'll pick him up.