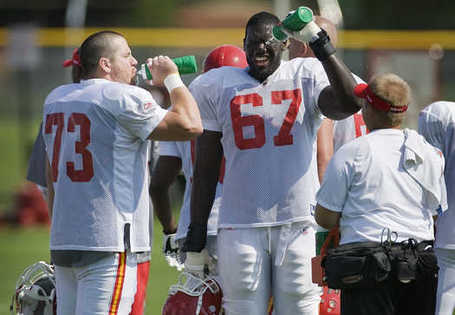 The Chiefs had to cut one player to make room for the addition and, according to folks at Scout, it's tackle Barry Richardson.

Within seven days, the Kansas City Chiefs have released the starting and backup right tackle.  If that's not an indication of their unhappiness with the position then I don't know what is.

Richardson was selected in the sixth round out of Clemson in the 2008 draft.  He was expected to be a project but had more than a few of us excited in the early goings because of his physical tools.  Apparently, those tools didn't cut it.  And, if you watched a few of the preseason games this season in which Richardson participated at right tackle, there's no apparently about it.  He struggled.

With this move, you have to give it to the new regime - if they don't like something, they're quick to move on.  In this case, however, I would imagine the Chiefs take a long look at Richardson as a practice squad guy considering the lack of bodies on the offensive line.

That makes 13 of Herm Edwards' 26 draft picks still on this team.